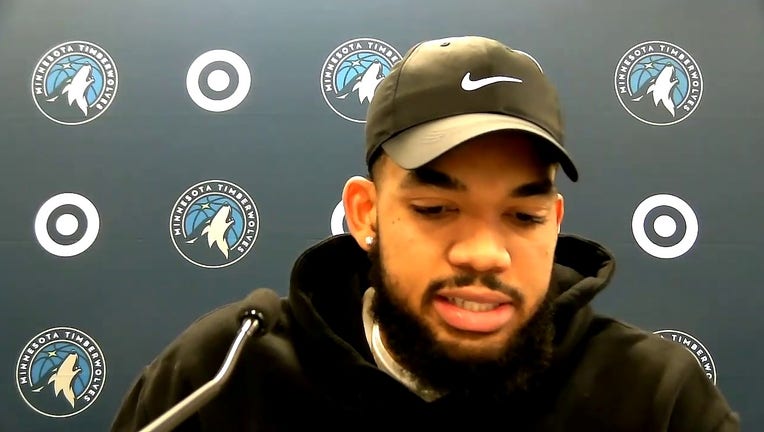 Timberwolves star Karl-Anthony Towns talked Wednesday night about his struggles with COVID-19, which caused him to miss 13 games.

MINNEAPOLIS - Karl-Anthony Towns got on the basketball court in a playing capacity for the first time in nearly a month Wednesday night. He scored 18 points and grabbed 10 rebounds, logging 31 minutes in a 119-112 loss to the L.A. Clippers.

It was his first game back since testing positive for COVID-19 in mid-January. He went into detail for more than 20 minutes after the game about what the last month and year has been like. He was hit hard by COVID, having nights where he felt terrible and had bad vitals. He has pre-existing conditions, which made his battle with the virus more complicated than most.

Karl-Anthony Towns got on the basketball court in a playing capacity for the first time in nearly a month Wednesday night.

He was in isolation, couldn’t play basketball and couldn’t see anyone. His only contact with people came on the phone and on FaceTime.

"Getting Covid stopped everything in its tracks and left me with a decision, and I picked my family. I’m a high risk case, Covid did not treat me well whatsoever. A lot of scary nights," Towns said.

He said he spent a lot of nights in the dark, staring at a memorial for his mother. Jackie Towns died in April of 2020 due to health complications after contracting COVID-19, and Towns carries many of her genetics. Conversations with his father, his sister, her kids, his girlfriend and his teammates got him through rough times. In addition to his mother's death, Towns lost at least six other relatives to complications from the virus.

There were times he felt symptoms bad enough, he questioned if he’d ever play basketball again.

"A lot of people have the hero stories where people get Covid and like four days, five days don’t feel well and then like turned a corner magically one day. That did not happen with me," Towns said. "I know fans and people who play fantasy sports all the time want Karl to come back on the court, it’s supposed to be 12 days and he’s on the court, that ain’t how life is. Everyone’s case of Covid is totally different, every human and their underlying conditions are totally different. My underlying conditions did not play in my favor at all for Covid."

Towns also gave brief detail about a car accident he was in last summer. He was in California, spending time with his girlfriend, Jordyn Brooks, who was on a photo shoot. He was minutes away, in her vehicle when he was hit by a drunk driver in the middle of the afternoon. The crash was bad enough that he had to be hospitalized, though he didn’t offer details on his injuries.

Fast forward to the 2021 season, and he was two games in when he went down with a left wrist injury. He missed seven of eight games, then not long after, contracted COVID-19. He missed 13 games due to the virus, and admitted he probably wasn’t ready to play Wednesday. But he suited up with a push from his teammates.

Towns said as long as the NBA and players adhere to health and safety protocols, he plans on playing the rest of the season. One thing he made very clear is that he doesn’t think the NBA All-Star Game should be played. It’s currently scheduled for March 7 in Atlanta.

"I personally don’t believe there should be an All-Star Game, but what the hell do I know? Obviously I haven’t dealt with Covid. I’ve got some insight into that, but what do I know about Covid, right?" Towns said.

He even went so far to say that he felt guilty for the medical treatment he got to battle COVID-19, being an NBA athlete. His wish is that those resources were available to everyone.

He spent weeks in isolation, dealing with mental struggles he’s put off most of his life. He had a physical struggle with COVID-19, wondering at times if he would ever recover and play basketball again. He leaned on his family, his teammates and his faith.

Wednesday was his first real taste of feeling normal again. He finished more than 20 minutes with reporters with a message for those who either aren’t taking COVID-19 seriously, or don’t like masks, while front-line workers do what they can to mitigate the worldwide damage: "Think of others, be responsible."

His own mother, who died from COVID-19 complications, was a front-line worker.

"People complain about wearing a mask, but these front-line workers are in there with people who are possibly dying and wearing four masks, and you can’t wear one? Just one? Like, stop it. Don’t be lazy, think of others before yourself, wear the mask, do your part. If you really hate this disease, help us end it. Be responsible, that’s as simple as it gets," Towns said.