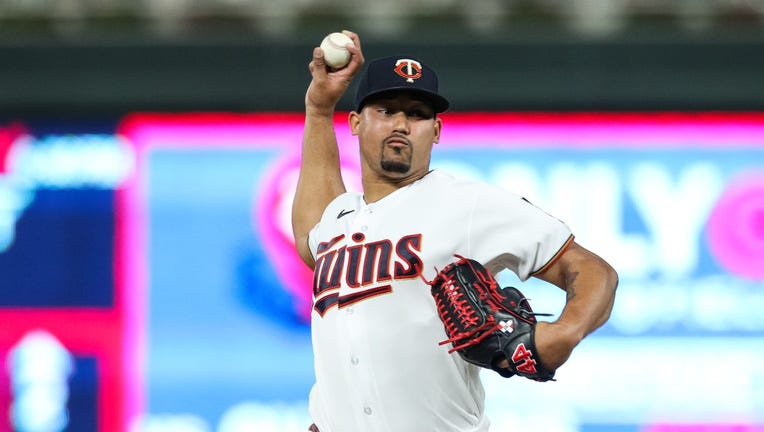 Jhoan Duran #59 of the Minnesota Twins delivers a pitch against the Boston Red Sox in the seventh inning of the game at Target Field on August 29, 2022 in Minneapolis, Minnesota. The Twins defeated the Red Sox 4-2.  ((Photo by David Berding/Getty Images))

MINNEAPOLIS - The Minnesota Twins got a 4-2 win over the Boston Red Sox Monday night at Target Field thanks to a three-run double from Gio Urshela, but the talk after the game was about reliever Jhoan Duran.

And for a change, the talk of a Twins’ reliever after a game wasn’t about letting a lead slip away. Duran got the seventh inning with the Twins in front, and needed 14 pitches, 10 for strikes, to get two strikeouts and a groundout in a clean inning.

It was how he did it that had Twins’ fans, his teammates and even the broadcasters turning heads. Duran is known for his 100-plus mile per hour fast ball. Duran struck out Alex Verdugo on a 100-mile per hour splitter, becoming the first pitcher in Major League Baseball history to throw an off-speed pitch 100 miles per hour.

"That pumps you up like very few things I’ve ever seen from a pitcher, ever, since I’ve been in baseball. My God, that is some insane stuff going on out there when he takes the mound," Twins’ manager Rocco Baldelli said after the win.

Dylan Bundy turned it to the bullpen after allowing just two runs over 4 2/3 innings. The relievers combined to throw 4 1/3 innings of shutout baseball, combining to allow just one hit on the night. Bundy was in awe watching Duran pitch the seventh.

"Dang, we said 100 in the clubhouse. Whoa, I’m jealous," Bundy said. "That’s unheard of, apparently nobody has ever done that. He deserves a cake.

Most importantly, the Twins improved to 66-61, have won four straight and are now within 1.5 games of the Cleveland Guardians in the American League Central Division.