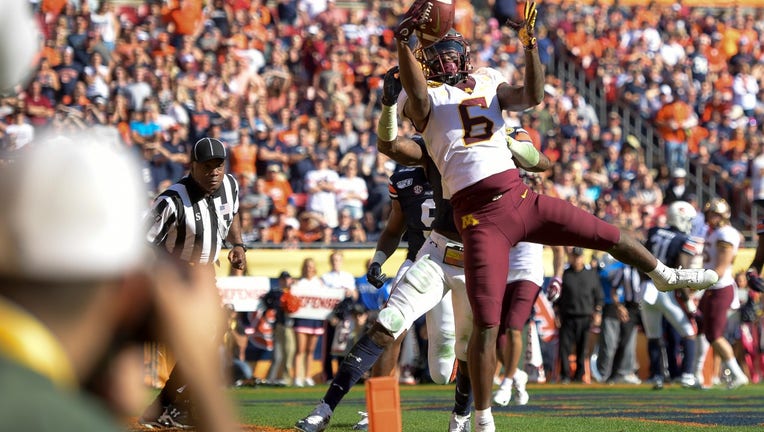 Minnesota Gophers wide receiver Tyler Johnson (6) scored a touchdown late in the second quarter against the Auburn Tigers during the Outback Bowl on Wednesday, Jan. 1, 2020 at Raymond James Stadium in Tampa, Fla. ((Photo by Aaron Lavinsky/Star Tribune via Getty Images))

MINNEAPOLIS (FOX 9) - About this time last year, Tyler Johnson had a decision to make.

He had just finished a 7-6 season with the University of Minnesota football team with four catches for 57 yards and two touchdowns as the Gophers beat Georgia Tech in the Quick Lane Bowl. He could leave school a year early to test the NFL Draft waters, or he could come back for one final run with the Gophers.

Players touched down Wednesday evening in Minnesota after getting a big bowl win in Florida to kick-off 2020.

It turns out his decision didn’t have a lot to do with football. The Minneapolis native and former North Minneapolis football and basketball star had a promise he had to keep. He wanted to be the first in his family go get a college degree. The man who led North to state championships in football and basketball, and was one of the key figures to keep the small school open, posted on Instagram nearly a year ago he was coming back to school.

Little did he know what was coming in the next 12 months. He was the MVP of the Outback Bowl on Wednesday with 12 catches for 204 yards and two touchdowns. The Gophers beat Auburn 31-24, and won 11 games for the first time since 1904.

“It was definitely worth it. After the bowl game last year, Coach Fleck sat me down in his office. We just talked, we just chatted. He said whatever I do, he respects my decision. I still think it was the best decision for me. I got to come back, be the first in my family to get the degree. So I’m setting the standard for high for not only myself, but my community,” Johnson said.

He’ll graduate this spring with a degree in business and marketing education. His 12 catches were an Outback Bowl record, and in an era where NFL hopefuls not in the College Football Playoff skip bowl games to avoid injury, Johnson never hesitated on playing.

“It was my last chance to go out there and give it everything I got in Maroon and Gold. Being able to represent not only myself, my family, my community, one last chance. Being able to do that, right away I knew I was going to play in the game, especially since it was against one of the best defenses and programs in the country,” Johnson said.

Johnson and the Gophers were facing an Auburn defense ranked in the top 20 in the nation. He gave NFL scouts and team personnel game film against an SEC opponent that should have them drooling over his talent until the draft in April.

He made a stunning 1-handed catch in the back of the end zone, getting one foot down just inside the back line to give the Gophers a 24-17 lead over the Tigers at the half. The play put him in the Minnesota history books. It was his 32nd career touchdown, most in Gopher history, ahead of Ron Johnson’s 31.

He got his usual catches on slants. Then in the fourth quarter, he teamed up with Tanner Morgan for the game-winning score. Morgan hit him in stride as he torched a defensive back for a 73-yard touchdown.

“He’s going to leave here the greatest receiver in the history of the University of Minnesota. "I think he’s proven whether it’s yards or touchdowns or catches that he’s the ultimate wide receiver here,” Fleck said.

Not bad for a kid who entered college having never played the position. He was an athlete, mostly at quarterback, for Minneapolis North.

Fleck fought tears talking about Johnson after the Outback Bowl. He’s sending a star receiver to the NFL, who’s grown and matured in Fleck’s “Row the Boat” culture.

“I thank him because he didn’t have to do what he did, and when you have players who do that, and that’s your second year of coaching and they’ve had three coaches and three different cultures and he decides to stay and do that, he sets the example for so many,” Fleck said.” It was his decision, nobody forced him to stay. He got the right advice from the people he loves from the people he trusts. This just shows when he makes the right decision, positive things happen.”

“It feels amazing to go out here with my brothers, last collegiate game, just to do what we have. “To be able to go out there and play with them one last time, give it everything we got, it’s something that I’ll definitely remember.”