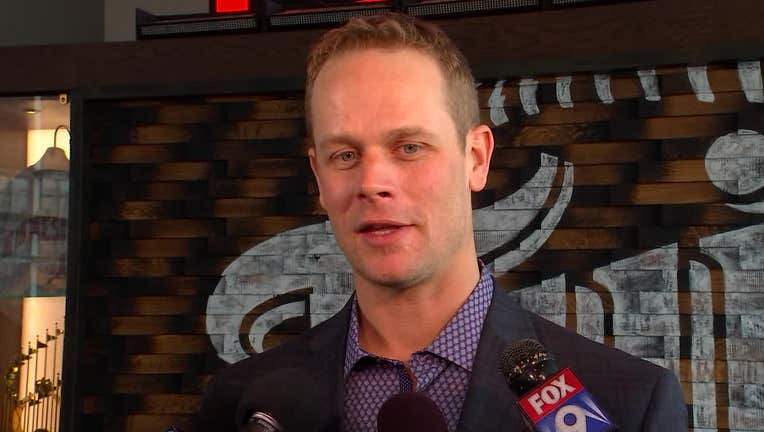 MINNEAPOLIS - The Minnesota Twins started their annual TwinsFest celebration Friday by putting one of the best first basemen in franchise history into the team’s Hall of Fame.

The Twins held a luncheon before baseball fans are expected to fill Target Field this weekend as we get ready for baseball season. Before Twins players head south for Spring Training, fans get a chance to get up close and personal with their favorite players at TwinsFest.

Justin Morneau is the lone 2020 inductee for the Minnesota Twins Hall of Fame.

It all started with Morneau being selected to the Twins Hall of Fame. He’s the 34th member, and will have an induction ceremony before the Twins host the White Sox on May 23.

“It’s hard to put into words when you’re recognized for something like this, especially in this organization. Such a great history. To be alongside the great players that I played with, watched and learned about. Any time you’re named with Harmon Killebrew, Tony Oliva, (Bert) Blyleven, you can go down the list of guys that have had an impact on this organization. To be alongside those guys is really special,” Morneau said Friday.

Morneau spent 11 of his 14 major league seasons with the Twins and was a four-time All-Star. He hit the pinnacle of his career in 2006, winning the MLB Most Valuable Player Award after hitting .321 with 34 homers, 37 doubles and 130 RBI in 157 games.

He said the 2006 season is probably the greatest memory that he’ll take with him the rest of his life. That regular season ended with a win over the Chicago White Sox, and then they had to wait for the Kansas City Royals to beat the Detroit Tigers to clinch the AL Central title.

Most fans in attendance stayed and watched the game while the Twins stayed in the dugout.

“I always say my favorite memory is the last day of the season in ’06. Watching on that whole non-HD screen at the Metrodome and there’s 60,000 people. I feel like nobody left the ballpark,” Morneau said.

Morneau was on pace to be considered for the MVP award again in 2010, hitting .345 with 18 homers through 81 games before his season got derailed with a concussion. He was sliding into second base at Toronto when he took a knee to the head, and his career was never the same.

Morneau ranks fourth in team history with 221 homers, fifth in slugging percentage at .485, 10th with 289 doubles and 10th with 860 RBI. He was also a centerpiece on three Twins teams that won American League Central Division titles, playing more than 1,300 games with the Twins.

Morneau played 127 games for the Twins in 2013 before being traded to the Pittsburgh Pirates. He signed with the Colorado Rockies in free agency in 2014, and finished his career in 2016 with the Chicago White Sox.

More than anything, Morneau says he wants to be remembered as a competitor.

“I loved to compete, I wanted to win as much as anybody. My teammates said they loved going to battle with me and that means a lot,” Morneau said.

He now does color commentary for Fox Sports North for select Twins games during the season. Morneau will be officially inducted into the Twins Hall of Fame when they face the White Sox on May 23. He’s the 34th member of the Twins Hall of Fame, and lone inductee for 2020. The voting committee featured 71 members.

At the Twins Diamond Awards Thursday night, Morneau was honored for his community service with the Carl R. Pohlad Community Service Award.