MINNEAPOLIS (FOX 9) - Watch Vikings Gameday Live from 10-11 a.m. Sunday on FOX 9 and streaming in the player above.

The Minnesota Vikings will finish the 2022 regular season at noon Sunday against the Chicago Bears at Soldier Field, a game you can watch on FOX 9.

Before kickoff, tune into Vikings Gameday Live with Mark Rosen, Dawn Mitchell, Ron Johnson, Pete Bercich and Ben Leber from 10-11 a.m. (watch live in the player above). The Vikings are looking to end the regular season 13-4 in the first year under Kevin O’Connell, and possibly jump up to the No. 2 seed in the NFC Playoffs. They’ll need a win, and a San Francisco 49ers loss to the Arizona Cardinals to get there.

Otherwise, the Vikings will be the No. 3 seed and are likely to host the New York Giants on Wild Card Weekend. Most importantly, they’re looking to head into the playoffs with a better performance after losing last Sunday at Green Bay, 41-17.

The NFL world was shaken after Damar Hamlin collapsed on the field in Cincinnati Monday night, went into cardiac arrest and had to be revived twice. He’s made dramatic improvements, and even spoke to the Buffalo Bills via FaceTime Friday morning.

As for Sunday’s game at Soldier Field, the Vikings will at minimum be without Garrett Bradbury and James Lynch. Brian Asamoah, Cam Dantzler and Za’Darius Smith are listed as questionable. The Bears are without Justin Fields, so there’s a chance the Vikings could rest their defensive starters or limit their snaps.

What time does the Vikings-Giants game start? 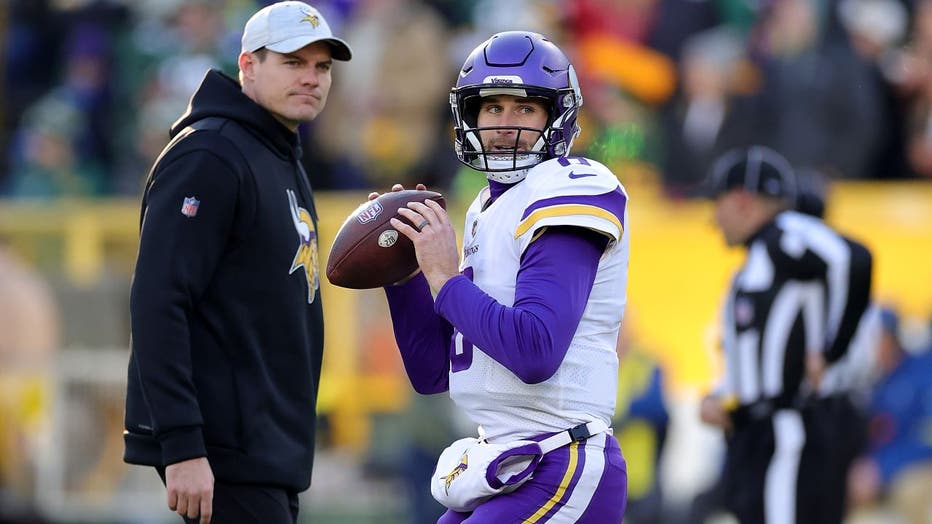 Kirk Cousins #8 of the Minnesota Vikings participates in warmups prior to a game against the Green Bay Packers at Lambeau Field on January 01, 2023 in Green Bay, Wisconsin. (Photo by Stacy Revere/Getty Images)