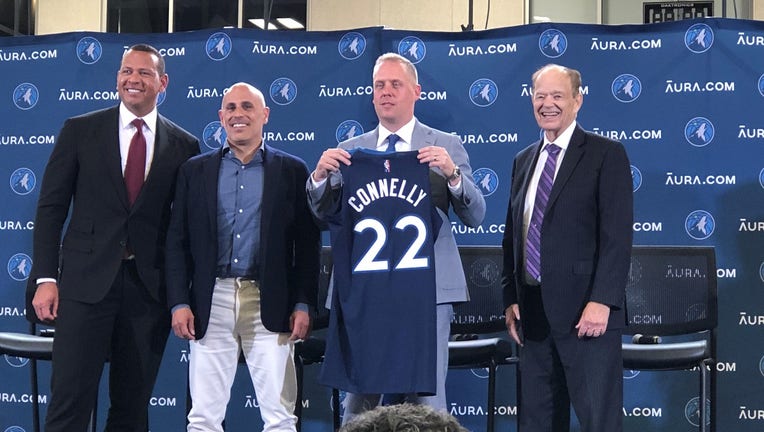 The Minnesota Timberwolves on Tuesday introduced Tim Connelly as the new President of Basketball Operations in a news conference at Mayo Clinic Square.

MINNEAPOLIS - NBA free agency starts at 5 p.m. Thursday, and it’s hard to tell immediately how active the Minnesota Timberwolves might be.

A trio of Minnesota Timberwolves rookies were introduced to both fans and media today, answering questions about what they hope to contribute this season.

On Wednesday, the Timberwolves announced they’ve picked up contract options on guard Jaylen Nowell and Naz Reid. Wolves’ coach Chris Finch, after the newest rookies were introduced Tuesday, spoke glowingly about the potential of Nowell, Jaden McDaniels and Anthony Edwards as the franchise shifts its goals from making the playoffs to winning playoff series.

Nowell played in 62 games last season and averaged 8.5 points, shooting better than 47 percent from the field. Edwards, in his second season, averaged 21.2 points, 4.8 rebounds and 3.8 assists in 72 regular season games. In six playoff games, he averaged more than 25 points per game and shot better than 40 percent from the perimeter. In 70 regular season games, McDaniels averaged 9.2 points and 4.2 rebounds per game.

"We can talk about this draft class, we can talk about free agency. But the one thing we know for sure is that the internal development of Ant, Jaden and Jaylen, those three guys, will be the single best driver of how far we can go next year before we do anything else," Finch said.

One thing we can expect as free agency opens: A super max contract for Karl-Anthony Towns. In 74 regular season games, Towns averaged 24.6 points, 9.8 rebounds and 3.6 assists per game. Towns became eligible for the super max extension after being named Third Team All-NBA for the second time.

"It’s all of our hopes really. We know he’s happy, we’re extremely happy for him and for the ability to have this extension. I know he worked hard for it and he’s excited, so I think it’ll be a special moment for him and for this organization," Finch said.

One elephant left in the room as the future of D’Angelo Russell. Without his play in the regular season and a huge night in the play-in game against the L.A. Clippers, the Timberwolves might not have been a playoff team. He also struggled at times against the Grizzlies, most glaringly in Game 6 of the fourth quarter, where he sat in an elimination game after Finch played Jordan McLaughlin over him.

Putting salt on that wound, Andrew Wiggins was the second-best player on the floor as he won his first NBA title with the Golden State Warriors.

It’s all led to speculation the Timberwolves might seek a trade for Russell, who is making north of $30 million next season. We’ll get a much better idea of where Tim Connelly might take the Timberwolves when free agency starts Thursday afternoon.