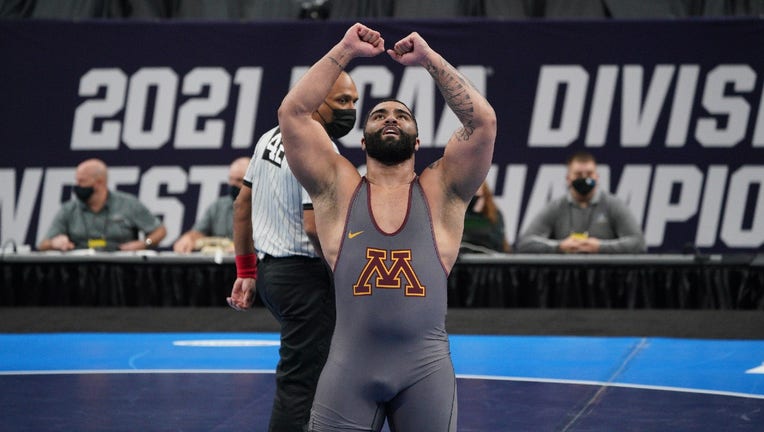 MINNEAPOLIS - University of Minnesota wrestler Gable Steveson on Wednesday was named the Big Ten’s Male Athlete of the Year for the 2021-22 season.

He’s also the 13th wrestler in the Big Ten to win the award. Steveson went 18-0 at heavyweight this past season to win his second straight NCAA title, and third Big Ten title.

"It is a great honor for Gable to be chosen as Big Ten Male Athlete of the Year among many other remarkable athletes," Gophers’ wrestling head coach Brandon Eggum said in a statement. "He is such a great representative for the University of Minnesota, our program, and the sport of wrestling. We could not be more proud of his accomplishments."

The Apple Valley native is 85-2 with the Gophers, which includes a 52-match win streak. His .977 win percentage is the highest in the history of Minnesota’s wrestling program. He’s also the only Gophers’ wrestler to win the Dan Hodge Trophy, which goes annually to the top college wrestler, multiple times.

Steveson graduated in May with a bachelor’s degree in communications and business. After winning his most recent NCAA title, Steveson left his shoes on the mat as a sign he was done with college wrestling. He currently has a professional contract with WWE, technically has one year of college eligibility left and is still pondering a return to the Gophers’ wrestling team next season.