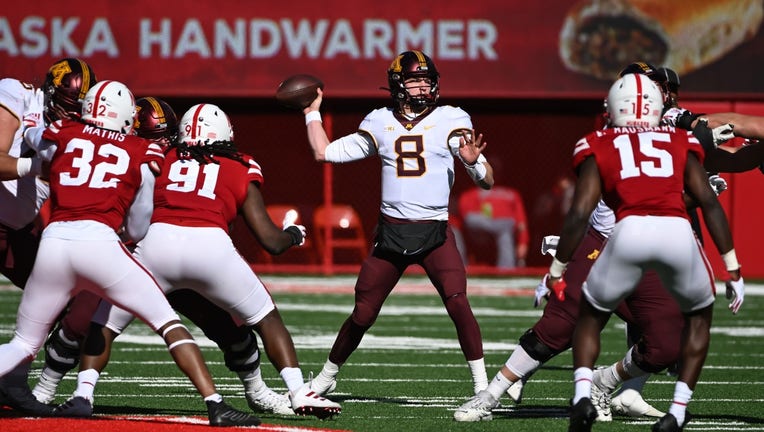 Quarterback Athan Kaliakmanis #8 of the Minnesota Golden Gophers passes against the Nebraska Cornhuskers during the third quarter at Memorial Stadium on November 5, 2022 in Lincoln, Nebraska.  ((Photo by Steven Branscombe/Getty Images))

MINNEAPOLIS - The University of Minnesota football team hosts rival Iowa at 3 p.m. Saturday in the annual battle for Floyd of Rosedale, and they’ll be without Tanner Morgan on Senior Day.

Morgan, one of 23 seniors for the Gophers, suffered an upper body two weeks ago at Nebraska late in the first half and missed the rest of the game. In his absence, redshirt freshman Athan Kaliakmanis led the Gophers to four second half scoring drives, 20 points and a comeback win over the Cornhuskers.

Morgan will leave the Gophers' program with 33 wins as a starter, a program record.

Kaliakmanis got his second career start last week against Northwestern, and finished 7-of-13 passing for 64 yards as the Gophers ran for 302 yards in a 31-3 victory over the Wildcats. He’ll try to lead the Gophers’ offense against an Iowa defense that’s one of the best in the country, with 12 interceptions and six fumble recoveries on the season.

The Gophers haven’t beaten Iowa since 2014, and PJ Fleck is 0-5 against the Hawkeyes. A win Saturday would end that skid, and keep the Gophers in the Big Ten West conversation heading into the regular season finale at Wisconsin.