Boye Mafe and Daniel Faalele were the headliners as the University of Minnesota football team held its Pro Day on Wednesday in front of NFL personnel from all 32 teams.

MINNEAPOLIS - The University of Minnesota football team hosted its annual Pro Day on Wednesday, a chance for now former players to showcase their skills in front of NFL personnel before the NFL Draft.

Every NFL team was represented on campus by either a general manager or a scout to watch 13 players from the Gophers’ 2021 squad that finished 9-4, including wins over Wisconsin and West Virginia in the Guaranteed Rate Bowl. Just like he did at the NFL Combine, rush end Boye Mafe put on a show on Wednesday.

The Golden Valley native weighed in at 257 pounds, and showed off a 41.5-inch vertical leap. He also ran a 4.20 short shuttle. Mafe did not run a 40-yard dash after running a 4.53 at the NFL Combine. He’s a freak athlete and will add tremendous skill on an NFL defensive line. He finished the 2021 season Second Team All-Big Ten, leading the Gophers with seven sacks and 10 tackles for loss. In 42 career games, he had 89 tackles, 19.5 tackles for loss and 15 sacks. 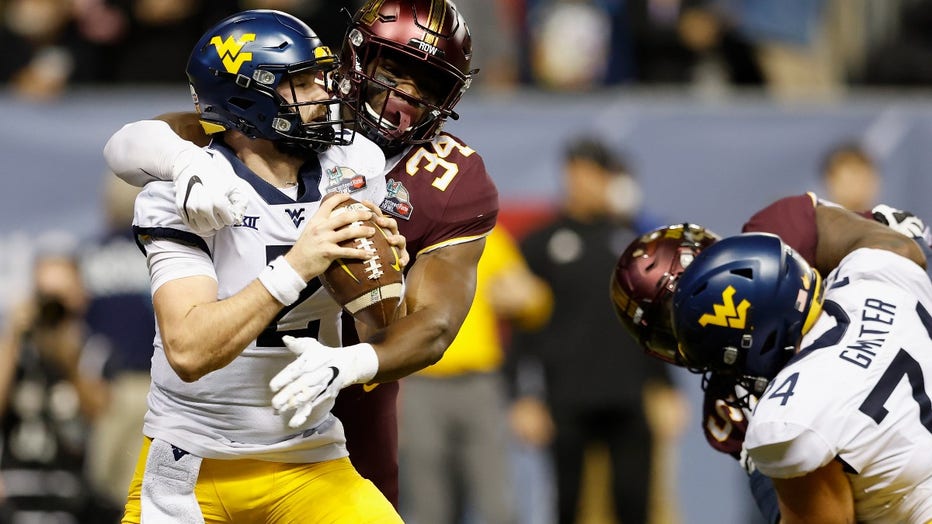 Quarterback Jarret Doege #2 of the West Virginia Mountaineers is sacked by defensive lineman Boye Mafe #34 of the Minnesota Golden Gophers during the first half of the Guaranteed Rate Bowl at Chase Field on December 28, 2021 in Phoenix, Arizona.  ((Photo by Christian Petersen/Getty Images))

Mafe says he’s just scratching the surface, after competing at the Senior Bowl and NFL Combine before Wednesday’s Pro Day.

"Coming into this process, I feel as if my best ball is in front of me. I played great for the Gophers and had a great career here, but I think honestly my best ball is still in front of me," Mafe said. "I haven’t tapped into my full potential yet, so I feel like that’s the biggest selling point for me."

The reality has set in, though, that he’s on the verge of becoming an NFL player. He could be a Day 1 pick, but what is certain is that he’ll be selected in the NFL Draft next month and get a chance to immediately impact a defense. It dawned on him in a conversation with his family this week.

FAALELE POISED TO BE FIRST GOPHER LINEMAN DRAFTED SINCE 2006

Daniel Faalele is still soaking it all in, participating in the Senior Bowl and the NFL Combine. Those who have watched him are taken aback by his sheer size, at 6-8 and 390 pounds.

Despite playing football for the first time five years ago, Faalele is set to be Minnesota’s first offensive lineman taken in the NFL Draft since Greg Eslinger and Mark Setterstrom in 2006. Faalele was part of a veteran offensive line in 2021 that helped lead the Gophers to having one of the top rushing offenses in the Big Ten, and 13 100-yard games despite three running backs suffering season-ending injuries.

His Gophers' career also included rushing for a touchdown in the Guaranteed Rate Bowl, and scoring touchdowns in consecutive Spring Games. Next month, he'll hear his name at the NFL Draft.

"It’s just going to be an awesome feeling being able to do that. I love playing for Minnesota and representing Minnesota. It’s awesome to be able to represent them at the highest level and I’m looking forward to it," Faalele said.