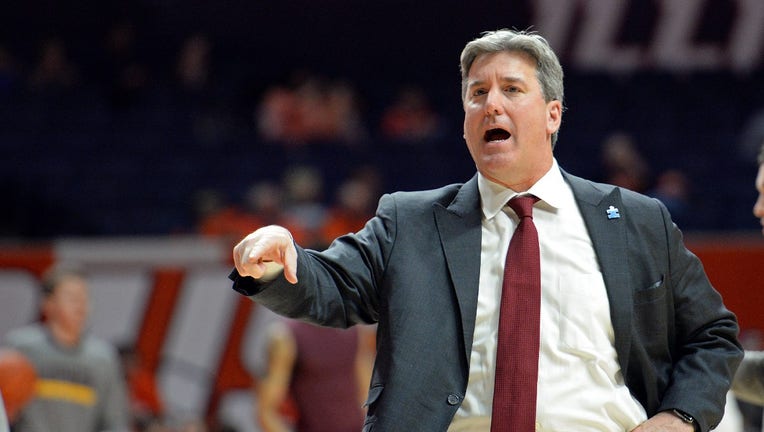 Minnesota Golden Gophers Assistant Coach Ed Conroy talks to players during the pre-game warm up for the Big Ten conference game against the Illinois Fighting Illini on February 4, 2017, at the State Farm Center in Champaign, Illinois. ((Photo by Michael Allio/Icon Sportswire via Getty Images))

MINNEAPOLIS - University of Minnesota men’s basketball coach Richard Pitino announced over the weekend that Ed Conroy has been promoted to associate head coach. Conroy recently finished his fourth season on Pitino’s staff with the Gophers and has more than 25 years in college coaching.

“Ed Conroy has been vital to our program’s success on and off the court since he has been here,” said Pitino. “He is a phenomenal recruiter and a terrific teacher of the game.  He has been integral in the development of our big men over the years.”

Conroy has been especially important in helping develop the Gophers’ frontcourt players. Minnesota has had the Big Ten’s leading rebounders in each of the past three seasons, with Jordan Murphy in 2018 and 2019, and Daniel Oturu last season.

Murphy is now with the Iowa Wolves in the NBA G-League, and Oturu recently declared for the 2020 NBA Draft and is expected to stay in after becoming Minnesota’s first All-American in 21 years. Conroy has been on the coaching staff for two NCAA Tournament teams at Minnesota.

A day after Conroy’s promotion, his nephew announced his commitment to transfer to the Gophers next season. Liam Robbins, a 7-foot, 235-pound center who transferred from Drake after his sophomore season, committed to Pitino and Minnesota on Sunday. Robbins averaged 14 points, seven rebounds and three blocked shots last season for Drake.

He’s considered one of the top transfer centers in college basketball, and set a Drake school record with 99 blocked shots last season. National experts say Robbins has the potential to play professionally, and is just scratching the surface of is potential.

Under current NCAA transfer rules, Robbins would have to sit out next season. But he's pursuing a waiver that would grant him immediate eligibility.

Pitino also isn’t done adding to his coaching staff for the 2020-21 season. Assistant coach Rob Jeter departed for the head coaching job at Western Illinois, and a national search has started to find his replacement.

Pitino also has one more scholarship to fill for the 2020-21 season.