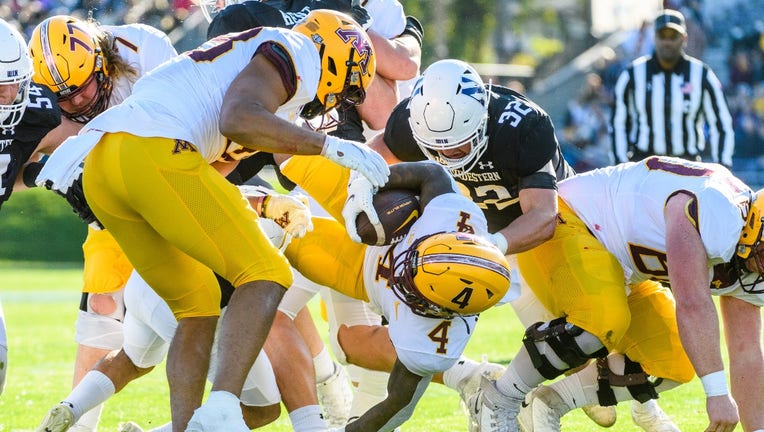 MINNEAPOLIS - It was PJ Fleck's perfect formula as the University of Minnesota football team dominated in a 41-14 win over Northwestern on Saturday at Ryan Field.

The Gophers ran for 308 yards, averaged nearly six yards per carry, dominated the time of possession and got four rushing touchdowns from three different players. They got another stingy effort from the defense, including the first defensive touchdown of the season.

Minnesota had to rely on Mar'Keise Irving, Ky Thomas, Derik LeCaptain and Tanner Morgan in the run game after Bryce Williams went down in the first quarter with a left leg injury following an 18-yard catch for a first down, and didn't return. Williams had to be carted to the locker room, and was eventually put in a wheelchair, unable to put weight on his left leg.

The Gophers improved to 6-2 on the season to earn bowl eligibility, and now lead the Big Ten West at 4-1 after No. 9-ranked Iowa lost 27-7 at Wisconsin on Saturday. The Gophers finished October 4-0, and control their own destiny for a division title with four games left after a stunning loss to Bowling Green on Homecoming.

The approach doesn't change, even if the personnel does.

"We showed what our team is about. It’s a new identity every week, new personnel that you have to rely on without really any evidence. That’s really difficult to do, and you need a really good team to do that," Fleck said after the win.

Minnesota’s offensive line was dominant again as the Gophers had a pair of 100-yard rushers for the second straight week. Irving had 19 carries for 110 yards and two touchdowns. Thomas had 21 carries for 106 yards. Minnesota piled up 442 total yards and 27 first downs, and possessed the ball for more than 40 minutes. It's the Gophers' second straight week rushing for more than 300 yards after they piled up 326 yards against Maryland.

"Our o-line is special right now. We’re playing as a unit right now, five as one. Those young backs are special," center John Michael Schmitz said.

The Gophers' first score of the game came from the defense, on Northwestern's first offensive play. Mariano Sori-Marin forced a fumble after a Malik Washington catch. Justin Walley recovered and took it 25 yards for the scoop and score to give the Gophers a 10-0 lead in the first quarter.

Minnesota’s defense stood tall yet again Saturday. The Gophers limited the Wildcats to 241 total yards and just 13 first downs. Northwestern had just 11 yards passing in the first half before Ryan Hilinski was benched for Andrew Marty, who finished the day 10-of-16 for 93 yards and two touchdowns. Boye Mafe and MJ Anderson had sacks, along with Walley's defensive touchdown.

Evan Hull was the offensive spark for Northwestern, finishing with 15 carries for 106 yards. Hull also caught a 6-yard touchdown in the second quarter, from Marty on a screen, for the Wildcats’ lone offensive score until late in regulation, with the game in hand.

Morgan finished 12-of-17 passing for 134 yards and an interception late in the first half. His offensive highlight of the day came on an 18-yard touchdown out of the run-pass option on the first play of the fourth quarter that gave the Gophers a 27-7 lead. He had the entire Northwestern defense frozen, thinking Irving was getting hand-off before running it in himself.

"I think that’s the most green grass I’ve seen in my career," Morgan said.

Irving’s second touchdown of the day, from 41 yards out about five minutes later, gave Minnesota a 34-14 lead with 9:33 to play.

LeCaptain, who switched from linebacker to running back with that position depleted due to injuries, had a 24-yard touchdown to put Minnesota up 41-14 with 1:56 left. His teammates erupted in celebration with him as he came to the sideline after the third touchdown of the fourth quarter.

"He’s not a running back, he’s a ‘running backer.’ That’s a little thing we’ve trademarked for him," Sori-Marin joked. "You just talk about a guy that does what he’s asked to do, doesn’t ask questions, just puts his head down and works, that’s Derik LeCaptain. Derik is the ultimate teammate."

Fleck may need him more, with the running back room getting thinner each week. Williams' injury is the latest at the position. Mo Ibrahim and Trey Potts are out for the season. Fleck said he won't know the severity of Williams' injury until they get back to the Twin Cities. Minnesota now turns to Irving, Thomas, wildcat quarterback Cole Kramer and others to continue their dominant run game.

The Gophers have won four straight games and host Illinois next Saturday at Huntington Bank Stadium. Illinois lost at home on Saturday to Rutgers, 20-14.

"1-0 championship season. If you don’t win the next one, you’re going to go from being first to fifth or whatever it may be," Morgan said. "Any team can beat you on any week, so you have to be at your best. We’re humble enough to know that anybody can beat us on any Saturday."