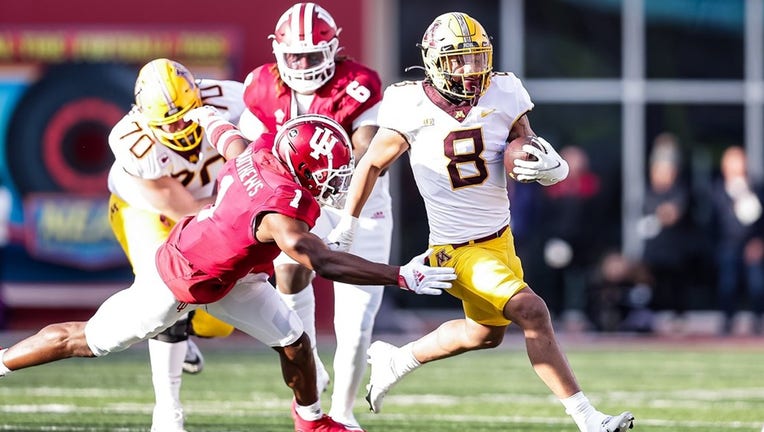 MINNEAPOLIS - Wednesday is National Signing Day for PJ Fleck and the University of Minnesota football team, but Monday was dominated by talk of getting the band back together for the 2022 season.

While the Gophers get ready to face West Virginia in the Guaranteed Rate Bowl on Dec. 28, Fleck made it official last week that Kirk Ciarrocca is coming back as the offensive coordinator for the 2022 season. He won’t coach in the bowl game, as he spent this season as an offensive analyst for the Gophers’ opponent, the Mountaineers.

Ciarrocca left two seasons ago, and spent one season at Penn State. When Fleck parted ways with Mike Sanford Jr. less than a month ago, one of his first calls was to Ciarrocca.

"It happened pretty quick. I thought we needed a change in leadership on offense, who better to start with than somebody you’re very familiar with and see if he’s interested? I thought it was a no-brainer to at least bring it down that avenue and see where it led," Fleck. "Very excited to have him back."

Ciarrocca said Monday the decision was pretty easy to return to Minnesota. After a discussion with his wife, it came down to three factors: Coaching for Fleck, returning to the same offensive staff that he had two years ago and the players. The reality for Fleck and the Gophers is they were a more consistent offensive approach away from being in the Big Ten West title game, after finishing the season 8-4.

Ciarrocca was in charge of the offense in 2019 that helped lead the Gophers to an 11-2 season, one where Tanner Morgan set several passing records.

"Minnesota has got a great football program here. PJ has built a great culture here, but I think there’s still some meat on the bone and I’m excited about helping maybe get over the top here with everything," Ciarrocca said.

Since the Gophers beat Wisconsin 23-13 to win back Paul Bunyan’s Axe and finish the regular season 8-4, it’s become official that Morgan, Mo Ibrahim and Chris Autman-Bell are coming back for the 2022 season. On Monday, center John Michael Schmitz became the latest to announce his return for a sixth season.

One of the anchors to the offensive line will be back in a Gophers’ uniform for one final season. Fleck joked Monday that he’s the top addition from the 2021 transfer portal, and he’s part of the "Encore Four" with Morgan, Ibrahim and Autman-Bell. A quarterback who set records in 2019, the 2020 Big Ten Running Back of the Year, this season's leading receiver and an All-Big Ten center back for 2022.

"It’s kind of the ‘I’m back’ series, the Encore Four, right? I’m just really excited to have those guys back, all four of them," Fleck said. "They’re all doing what’s best for not only them, but they’re doing what’s best they feel for the University of Minnesota. They’re coming back for another experience. They all made their won individual decisions, which is fun too. I’m excited they’re back."

Morgan said he decided in November, before the Gophers beat Wisconsin, that he was coming back for 2022. He was in general manager Gerrit Chernoff’s office when Autman-Bell came out of a meeting with Fleck, and had nothing but smiles for his quarterback. That’s when Morgan knew Autman-Bell was staying as well.

"I was like what are you doing? Why are you smiling for so long? It was just weird. He told me ‘I’m coming back for one more year, let’s run it back.’ We had a good moment. Super excited to have him back, have John Michael back, it’s huge,’ Morgan said. "Go out with guys that I came in with, it’s going to be really fun."

The Gophers signed defensive coordinator Joe Rossi to an extension on Monday that will keep him at Minnesota through the 2023 season. Rossi ran a defense that finished No. 4 nationally in total yards allowed at 284.8. Minnesota also had one of the top rushing defenses in the Big Ten, and finished No. 9 nationally in scoring defense, allowing just 18.2 points per game.

In the Gophers’ 23-13 win over Wisconsin, Rossi’s defense limited the Badgers to 233 total yards, and star Braelon Allen had 17 carries for just 55 yards after coming into the game on seven straight 100-yard games.

"Trust factor. I think Joe is one of the best defensive minds in college football. He’ll tell you he doesn’t have any other hobbies, it’s football and his family," Fleck said.

Up in the booth calling defensive plays during the game, Rossi ran down to the field after beating the Badgers to celebrate with his family. He got a picture of his kids holding Paul Bunyan’s Axe.

"That was an awesome one. When you get to share it with your family, that makes it even more special," Rossi said. "Gotta get that one blown up, that one will be in my office."