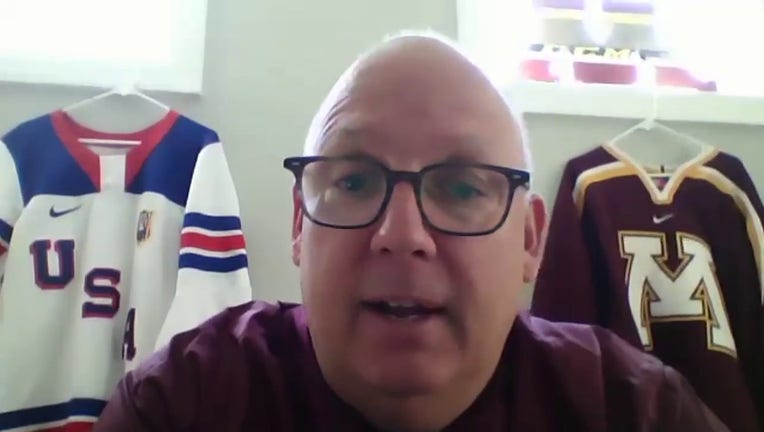 Bob Motzko spoke with reporters on Monday after being named the Big Ten Coach of the Year.

MINNEAPOLIS - In just his second season with the University of Minnesota men’s hockey team, Bob Motzko was named the Big Ten Coach of the Year on Monday.

Motzko is also a finalist for the Spencer Penrose Award, which goes every year to the national coach of the year. Motzko led the Gophers to the semifinals of the Big Ten Tournament, and Minnesota was preparing to play at Penn State without fans in attendance when the game and all remaining winter sports were canceled due to the Coronavirus pandemic.

"I really didn’t anticipate an award like this would come but the fact that it’s voted on by other coaches, it sure means a lot that accolades come right now. You’re humbled, but I’m also very grateful for the staff I have and we work with," Motzko said via Zoom on Monday. "Everyone at Minnesota, we’ve got a great set up, a great staff and I hope that’s an acknowledgment to that we’re doing the right things, moving in the right direction."

It’s his first Big Ten coaching award, and it’s the fifth coach of the year honor in his career. He became the third Minnesota coach earlier this season to earn his 300th career win, joining Doug Wood and Don Lucia.

"He is the ultimate definition of low ego, high output. He has come into our program, he has recruited relentlessly, he’s embraced Minnesota, he clearly understands the expectations to compete a high level," Athletic Director Mark Coyle said. "I can’t say enough good things about Bob Motzko. He’s been a special, special addition to our program."