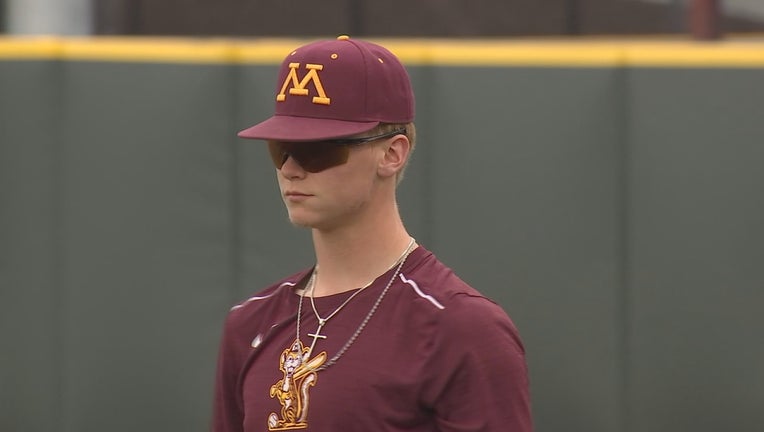 Minnesota Gophers pitcher Max Meyer is getting some buzz ahead of the MLB draft. (FOX 9)

MINNEAPOLIS (FOX 9) - A Minnesota Gopher pitcher is projected as a high first-round pick in the upcoming 2020 MLB Draft on June 10.

“It’s crazy like just thinking about it from high school, you know not even getting recruited by any schools to Minnesota and coming out and proving myself,” said Meyer.

The MLB season may not have started yet, but the draft is still set to go on. A Minnesota Gopher is hoping to make a splash on draft day.

“I’ve learned something that’s helped me as a coach from just being around Max and having the opportunity to watch his journey,” said Gophers head baseball coach John Anderson.

Anderson has seen his share of top caliber players in four decades of coaching at the University of Minnesota. Meyer is now climbing toward the top of that list, trying to be the first first-round selection from the Gophers since 2010.

“He dove in and never was satisfied with the success he had the year before and was always looking at ways to become a better pitcher and compete at a higher level,” said Anderson.

Meyer has done it all for the Gophers since he arrived on campus in the 2018 season. In his freshman year, Meyer closed games at an impressive rate. Over the last two seasons, he’s evolved into a starter. In this shortened season, Meyer went 3-1 with 46 strikeouts and a 1.95 ERA.

“That’s definitely an elite group, just seeing my name in all those groups and you know, I really haven’t thought about it too much. It’s still just crazy to me.”

Meyer is ready to see where the next step will take him once he’s taken off the draft board.

“I just want to go to a team that wants me and is going to keep pushing me to get better,” said Meyer.