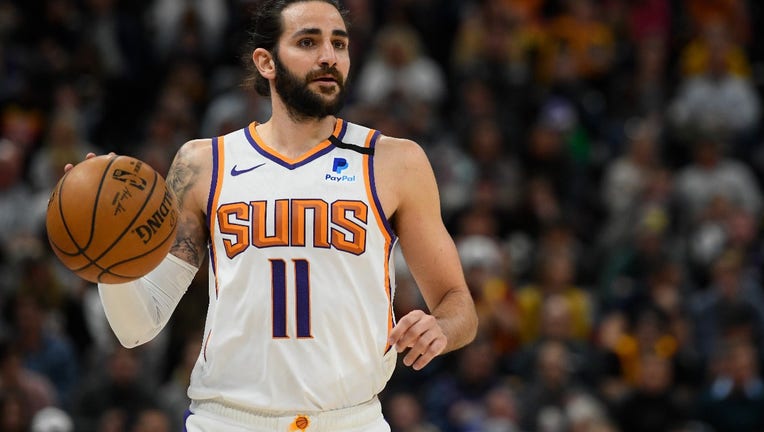 Ricky Rubio #11 of the Phoenix Suns in action during a game against the Utah Jazz at Vivint Smart Home Arena on February 24, 2020 in Salt Lake City, Utah. ((Photo by Alex Goodlett/Getty Images))

MINNEAPOLIS - Ricky Rubio never wanted to leave Minnesota, but because of the business side of the NBA, it was never his choice to make.

Three years after being traded to the Utah Jazz, Rubio is back with the Timberwolves, the team that drafted him in 2009. After taking Anthony Edwards No. 1 overall on NBA Draft night, Wolves front office head Gersson Rosas put together the assets to bring Rubio back to Minneapolis.

He’ll be a familiar face in the backcourt as the Timberwolves embark on training camp, trying to do something the team has done just once since Kevin Garnett led them to the 2004 Western Conference Finals: Make the playoffs. For now, he’s a veteran to play alongside Karl-Anthony Towns and D’Angelo Russell.

Citing a close relationship with coach Ryan Saunders and a desire to the Wolves back to the playoffs, Rubio feels he’s a great fit to be back with Minnesota. Saunders and Rosas emphasize that the move isn’t out of charity, and because he’s beloved by fans. They think Rubio can help the Wolves win.

“Ricky does things that don’t always show up in the box score. He impacts winning in a way where he can help young players grow. That’s what the thought process behind this was,” Saunders said. “That’s our goal here, it’s about people that are going to help you win.”

Rosas, who is about 18 months into his role as president of basketball operations, said Tuesday Rubio was a target in free agency last offseason. In today's NBA, you can't have enough ball-handlers, guards and shooters.

Rubio is coming off one of the best seasons of his career, starting 65 games with the Phoenix Suns. Playing alongside star Devin Booker, Rubio averaged a career-high 13 points, 8.8 assists, shot better than 41 percent from the field and played 31 minutes per game. He was part of a Suns’ team that went 8-0 in the Orlando bubble, though it wasn’t enough to make the playoffs.

He was traded to the Oklahoma City Thunder before coming back to Minnesota.

In a team filled with young players, he’ll provide a veteran presence as he enters his 10th NBA season. After being drafted by the Wolves in 2009, Rubio debuted in Minnesota in 2011. He played in 41 games, with 31 starts, and the Wolves were chasing a playoff spot when he went down with a torn ACL.

Rubio was traded to the Utah Jazz before the 2017 season after his first six years in Minnesota.

“I feel like I left with something that was unfinished I would say. I feel like I have a chance to really prove myself again, prove that I can help the team get to the playoffs,” Rubio said. “I’m a different player than when I came here, when I left. I have a lot more experience, grew up as a player, as a person too. I feel like it’s a good time.”

Rubio wants two things, more than anything, now that he’s back in Minnesota. He wants to play in front of fans, which won’t happen any time soon due to the COVID-19 pandemic. He also wants to help lead the Wolves to the playoffs.

Rubio says that starts with believing. That’s easier said than done with a franchise that’s been to the postseason once in the last 16 years.

“The big goal has to be playoffs, and this year there’s 10 spots. At the end of the day it’s not just about this year. I feel like this project goes beyond this year and it’s building something really good and special,” Rubio said. “I believe we have the talent here to make it happen.”

Rosas started the roster overhaul last year, bringing in Russell, Malik Beasley and Juancho Hernangomez, who are all back this season. Rubio gives Minnesota another veteran, though it’s not clear whether he’ll start or come off the bench. That’s up to Ryan Saunders.

“I’m here to really help the team. I can be put in any situation. I will have to earn my minutes. If it comes off the bench or starting, I will try to contribute what’s best for the team and if we’re winning, I’m not going to complain,” Rubio said.

Rubio is back where it all started. Now, it’s about helping the Wolves take the next step.

“It feels like home here. At the end of the day, all you remember is when you win,” Rubio said.