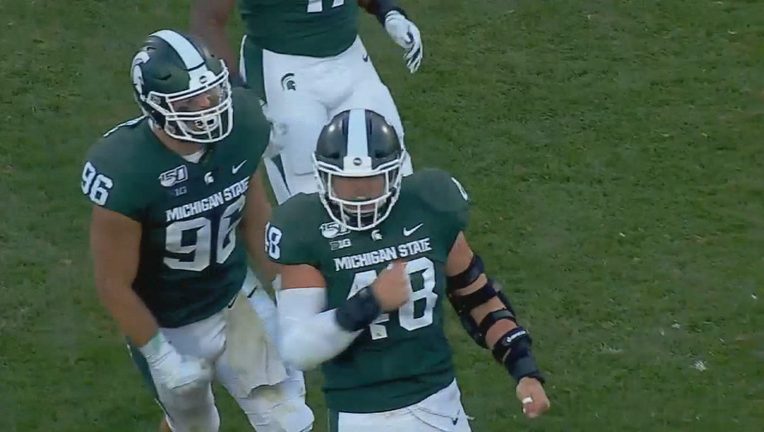 (FOX 9) - Willing himself to success has been the norm for Kenny Willekes in his football career.

The Vikings rookie defensive end started as a walk-on at Michigan State and turned that opportunity into an impressive run with the Spartans. The standout edge rusher won Big Ten defensive lineman of the year in 2018 & the Burlsworth Trophy, given to the best college football player who started as a walk-on.

Willekes now bringing that passion to the purple.

“The Vikings have a great defense … running to the ball, hitting people, flying around, tough, hard working,” Willekes told FOX 9. “That’s what I pride myself on and who I am.”

Kenny’s play caught the eyes of pro scouts across the NFL, but everyone got a glimpse of his athleticism online.

Willekes posted this impressive video before the draft, with the defensive end doing flips, handstands and other body contortion exercises.  A fun way to answer any questions about his athletic ability.

“My mom had us in gymnastics a little bit growing up, but I was too wild and they told me to go find a different sport,” Willekes said with a smile.

Kenny did find another sport with football, using those gymnast techniques while playing on the gridiron.

“At Michigan State they would call me ‘The Rubberband Man’ because I would be on one leg about to get dropped, and I always found a way to slither out of it due to my flexibility,” Willekes said. “It’s helped me out tremendously and I think it’s an overlooked part of the game.”

Kenny is bendy, but brute force is another attribute of his.

That comes from playing rugby in high school. Willekes led his team at North Pointe Christian to the Michigan state championship, even scoring the game-winner, in his only year playing on the team.

“In football, people use their helmets and shoulder pads as weapons to tackle sometimes, but in rugby you have to learn to really wrap and roll,” Willekes said of what he learned while playing rugby. “It definitely helped me become a more proficient tackler.”

Willekes is now taking that full body of athletic work and putting it to work in the NFL. A seventh-round pick getting ready to go down a path that he’s already been on before.

“I walked on at Michigan State, so being a seventh rounder and being a little underrated or whatever you want to say it is it really doesn’t matter to me,” Willekes added. “I just wanted a place to go play and get to come in to a wonderful organization with the Vikings.”