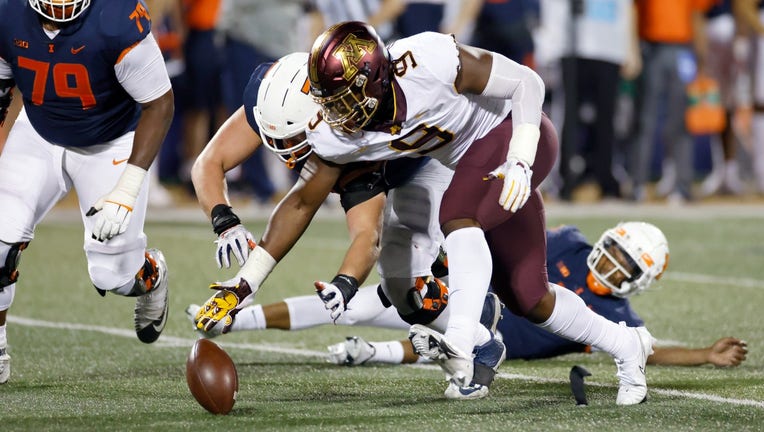 Esezi Otomewo #9 of the Minnesota Golden Gophers tries to recover a fumble by Coran Taylor #7 of the Illinois Fighting Illini in the fourth quarter of the game at Memorial Stadium on November 7, 2020 in Champaign, Illinois. Minnesota defeated Illinoi ((Photo by Joe Robbins/Getty Images))

MINNEAPOLIS - PJ Fleck had a beaming smile as he spoke with reporters after Maroon beat Gold in overtime 19-16 on sudden death field goals in the University of Minnesota football team’s annual Spring Game.

The Gophers finished the spring season with a competitive scrimmage and there were no major injuries out of the game, but four players from the 2021 team that finished 9-4, beat Wisconsin and won the Guaranteed Rate Bowl saw their NFL dreams become a reality. Boye Mafe got his call Friday night in the second round. Daniel Faalele, Esezi Otomewo and Ko Kieft all got theirs on Saturday.

Boye Mafe was one of four Gophers selected in the NFL Draft, taken No. 40 overall by the Seattle Seahawks.

While Fleck observed the Spring Game, Otomewo went to the Vikings in the fifth round with the 165th overall pick. Since Fleck was hired in 2017, the Gophers have had 12 players drafted.

Boye Mafe was with friends and family as he waited for his phone to ring. He got that life-changing call when the Seattle Seahawks were on the clock with the No. 40 overall pick, the eighth choice of the second round. He described it as "euphoric" and says he’s still on cloud nine.

"It meant the world to have everybody around me like that and just having them with me. It takes a village to raise a child," Mafe said. "Having them all here and the fact that they raised me basically, every one of them helped me along this path so it meant the world."

The 6-4, 265-pound rush end is an athletic freak. In nine starts last season, Mafe finished with 34 tackles, and led the Gophers’ defense with seven sacks and 10 tackles for loss. In 42 career games, Mafe had 87 tackles, 19.5 tackles for loss and is tied for ninth in program history with 15 sacks. He also has three fumbles and three pass break-ups.

He’ll likely compete to be a starting outside linebacker in Seattle’s 3-4r defense.

"Tears came down my face and I picked up and it was emotions flying from left and right. It hit me. I haven't cried like that in a minute, I was just ecstatic," Otomewo said.

Otomewo finished his Minnesota career with 81 tackles, eight tackles for loss and 4.5 sacks in 44 career games.

Daniel Faalele might have secretly been hoping all along he’d get drafted by the Baltimore Ravens. He had a top-30 visit with them, and had good vibes after that meeting. He eventually did get that call as the Ravens were on the clock in the fourth round with the No. 110 overall pick.

He started playing football in 2017, and is now teammates again with former Gopher star Rashod Bateman.

"I’m super excited. Rashod was my roommate sophomore and junior year. Super excited to connect with him again and be on the same team," Faalele said.

Faalele earned All-Big Ten honors last season as the Gophers had the No. 3 rushing offense in the league, despite losing their top three running backs to injuries. He started 34 games for Minnesota, and the team went 23-11 over that span.

While others wore flashy suits or fine jewelry, Gophers tight end Ko Kieft had a draft party that fits him perfectly. He got his call to the NFL while sitting in a lawn chair in a T-shirt, shorts and flip flops, in a garage in Iowa with family and friends.

Kieft was taken by the Tampa Bay Buccaneers in the sixth round, No. 218 overall. He’ll be reunited with former Gophers Tyler Johnson, and Antoine Winfield Jr.

Kieft was an All-Big Ten Honorable Mention pick last season and in 49 career games, had 12 catches for 166 yards and two touchdowns. He was more known for his physicality in blocking.

The 2022 NFL Draft marks the second time in three years the Gophers have had at least four players selected.