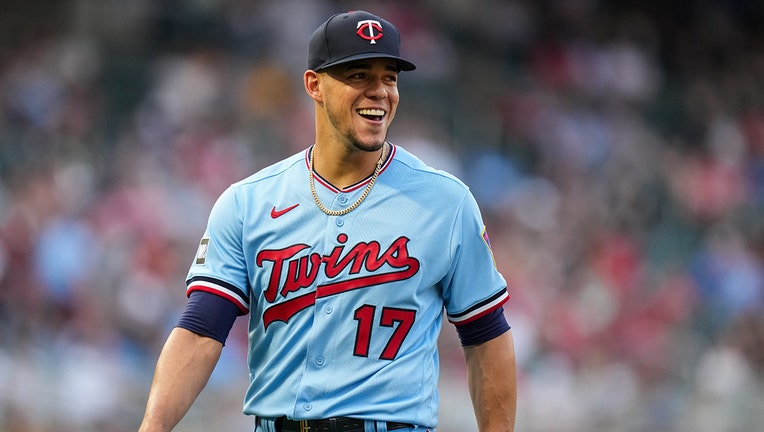 Jose Berrios #17 of the Minnesota Twins looks on and smiles against the Los Angeles Angels on July 24, 2021 at Target Field in Minneapolis, Minnesota.  (Brace Hemmelgarn/Minnesota Twins/Getty Images / Getty Images)

MINNEAPOLIS - The Minnesota Twins traded starting pitcher Jose Berrios before the July 2021 trade deadline last season, and on Tuesday, Berrios agreed to an extension to stay with the Toronto Blue Jays.

The deal is reportedly seven years, and worth $131 million. Berrios made 12 starts with the Blue Jays after being traded last season, and went 5-4 with a 3.58 earned run average, striking out 78 and walking just 13 in 70 innings. He made 20 starts with the Twins before being traded, and was 7-5 with a 3.48 ERA.

Berrios made 12 starts during the 2020 season, shortened due to the COVID-19 pandemic and tense negotiations between Major League Baseball and the players union, and finished 5-4 with a 4.0 ERA and 68 strikeouts in 63 innings.

The Twins will enter the 2022 regular season with major holes to fill in the starting rotation, and pitching being one of the top priorities entering free agency. With Berrios gone and Kenta Maeda out all of next season due to Tommy John surgery, the Twins are down to Randy Dobnak, Bailey Ober, Joe Ryan, Griffin Jax, Caleb Thielbar and Michael Pineda as pitchers with recent starting experience.