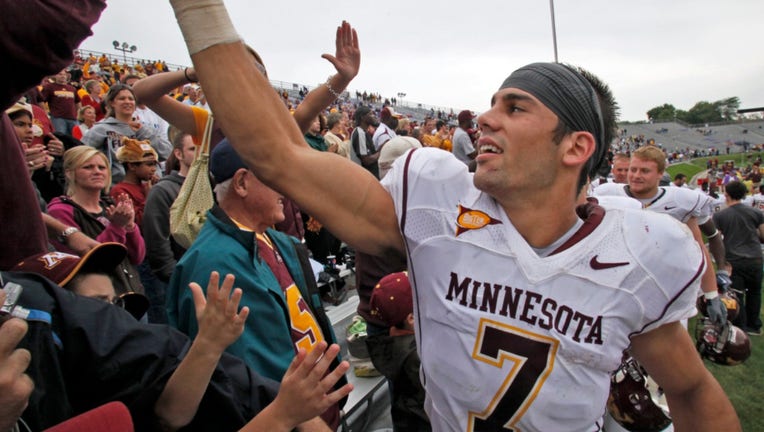 Gophers receiver Eric Decker is congratulated at the end of the game by Minnesota fans. Decker had two touchdown receptions. ( (Photo by Marlin Levison/Star Tribune via Getty Images) )

MINNEAPOLIS - The University of Minnesota football team hosts Wisconsin on Saturday in the biggest game in the 10-year history of TCF Bank Stadium.

The game between the No. 8-ranked Gophers and No. 12-ranked Badgers is for Paul Bunyan’s Axe, and for the Big Ten West Division title. The winner will advance to face Ohio State in the Big Ten Championship game next Saturday in Indianapolis.

ESPN’s College GameDay is in Minneapolis for the big game. The show will be broadcast from 8 a.m. to 11 a.m. on Northrup Mall on campus. We now know who will be on the show as Minnesota’s guest picker at the end of the show.

Former Gophers legendary wide receiver and Cold Spring native Eric Decker will take the set near the end of the show. Decker, along with Desmond Howard, David Pollack and Lee Corso will make selections on who they think will win various games on Saturday. The Gophers/Badgers match-up will be the final game selected, and Corso is known for putting on the mascot’s head ware of the team he thinks will win.

Kirk Herbstreit will also be on the show, but will not make a Gophers/Badgers prediction as he’s providing the color commentary on the game, with Chris Fowler on the play-by-play.

Decker had a historic four-year career as a wide receiver for the Gophers. He finished with 227 catches for more than 3,100 yards and 24 touchdowns, averaging 13.7 yards per catch over four seasons. He had nine touchdowns his junior year and was poised for a big senior year before having his final season cut short due to having foot surgery.

Decker went onto play eight seasons in the NFL with the Denver Broncos, New York Jets, Tennessee Titans and New England Patriots. He has 439 career NFL receptions, and 54 touchdowns.