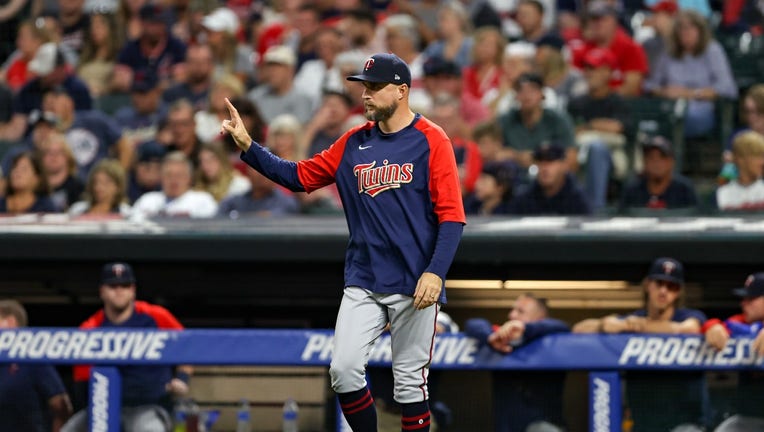 Minnesota Twins manager Rocco Baldelli (5) makes the call to the bullpen during the seventh inning of the Major League Baseball game between the Minnesota Twins and Cleveland Guardians on September 16, 2022, at Progressive Field in Cleveland, OH.  ((Photo by Frank Jansky/Icon Sportswire via Getty Images))

MINNEAPOLIS - The Minnesota Twins led the American League Central Division for most of the last five months, but after Friday night’s loss to the Los Angeles Angels of Anaheim, the Twins were officially eliminated from playoff contention.

"It's one of the worst moments I think we've seen of umpiring in any game I've been a part of in baseball." -- Rocco Baldelli. (Contains adult language)

"Rocco is our manager. He’s my partner in this all the way through. That’s never even crossed my mind, quite frankly," Falvey told reporters. "Rocco is a big part of our future. Not just next year, but beyond."

Baldelli won the 2019 AL Manager of the Year Award, leading the Twins to the AL Central title in his first season with the Twins. He led Minnesota to a pair of division titles in his first two seasons, but the organization is still plagued by losing 18 straight playoff games.

Baldelli has faced some criticism for the team’s strategy in using pitchers, and resting stars Carlos Correa and Byron Buxton in the same games. After Friday night’s loss, the Twins are on a five-game skid, have lost eight of their past nine and 17 of their last 23 games. In their most pivotal stretch of the season, trying to stay with the Cleveland Guardians in the AL Central, the Twins were swept at home by the Guardians, then lost four out of five at Progressive Field to essentially end their chances.

The Twins just could not stay healthy, and Falvey gave an update on Buxton Friday. He’ll miss the rest of the season as his set to have knee surgery on Tuesday. Buxton injured his knee on a slide in the first week of the regular season, and played through the injury much of the summer. Buxton has been on the injured list with a right hip strain, likely connected to his knee problem.

It’s the Twins’ hope that getting healthy in the offseason will get them back in contention in the AL Central in 2023.