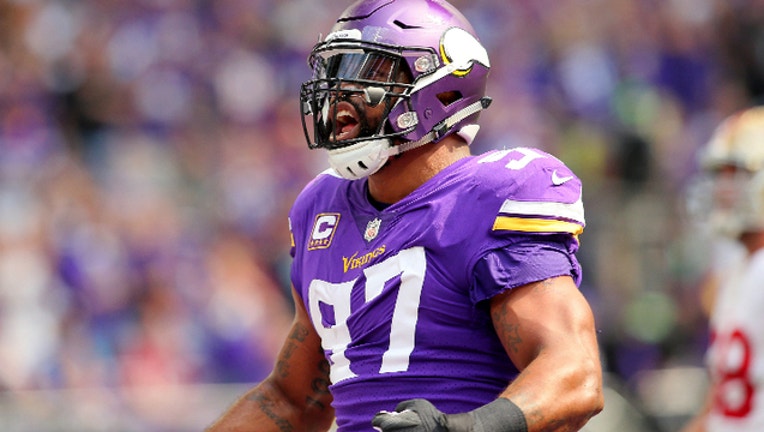 MINNEAPOLIS - Everson Griffen was a fan-favorite at defensive end for 10 seasons with the Minnesota Vikings. If he has any say in it, he might make a return to Minnesota in 2021.

Griffen was back in the Twin Cities over the weekend and active on social media. He still has a residence in Minnesota and often comes back to train locally. Griffen posted to his Instagram that he was at TCO Performance Center.

Griffen played in 14 games this season between the Dallas Cowboys and Detroit Lions, finishing with 18 solo tackles and six sacks. He made a total of five tackles in two games against the Vikings.

He made his desire clear that he’d like to return to the Vikings in 2021, if the interest is mutual. Griffen also went to social media to criticize Vikings quarterback Kirk Cousins, and suggested coach Mike Zimmer didn’t want the team to sign Cousins in 2018.

In a tweet that has since been deleted, Griffen said, "Ask ZIMMER if he wanted Kirk?????  He will tell you the truth??? Who wanted Kirk Cousins???? Take your guess???"

Griffen’s implication there is that Vikings General Manager Rick Spielman was the lead man who wanted to bring Cousins to Minnesota, which he did on a three-year, $84 million fully-guaranteed contract. The Vikings gave Cousins an extension before the 2020 season, and he finished with more than 4,200 yards passing and a career-high 35 touchdowns.

Griffen later apologized for his post, and calling out Cousins. He doubled down on it Monday, calling it "completely insane of me" and saying he's getting himself help.

Griffen missed five games during the 2018 season after getting detained following an incident at a downtown Minneapolis hotel, where he was making vague threats. He stepped away from the team to seek help, and returned for the final nine games.

Griffen has made it clear he’d like to return to Minnesota, and would add depth to a defense depleted by injuries this year. The Vikings lost Griffen, Linval Joseph and Stephen Weatherly to free agency, then lost Danielle Hunter to injury before the season and free agent addition Michael Pierce opted out due to COVID-19 concerns.