MINNEAPOLIS - The Minnesota Wild heads to St. Louis for Game 6 of their Stanley Cup Playoffs series against the Blues and the mission is simple: They need a win to keep their season alive.

The Wild had one of the best regular seasons in franchise history, collecting 113 points and finishing second in the Western Conference. Yet after Vladimir Tarasenko’s third period hat trick Tuesday night led to a 5-2 Blues’ win and 3-2 series advantage, the Wild needs a win Thursday night at Enterprise Center to force a decisive Game 7 on Saturday at Xcel Energy Center.

"We have all the confidence in ourselves. We have to focus on one game here and going into St. Louis, we can go in and rally as a team. It’s something we’ve done all year and we’re looking to continue that tomorrow," defenseman and captain Jared Spurgeon said.

To do that, Dean Evason will likely have to do something he hasn’t done all series: Make changes. He said Wednesday before the team’s flight to St. Louis that they will make changes, he just wouldn’t divulge them publicly. He hadn’t spoken to any players yet. 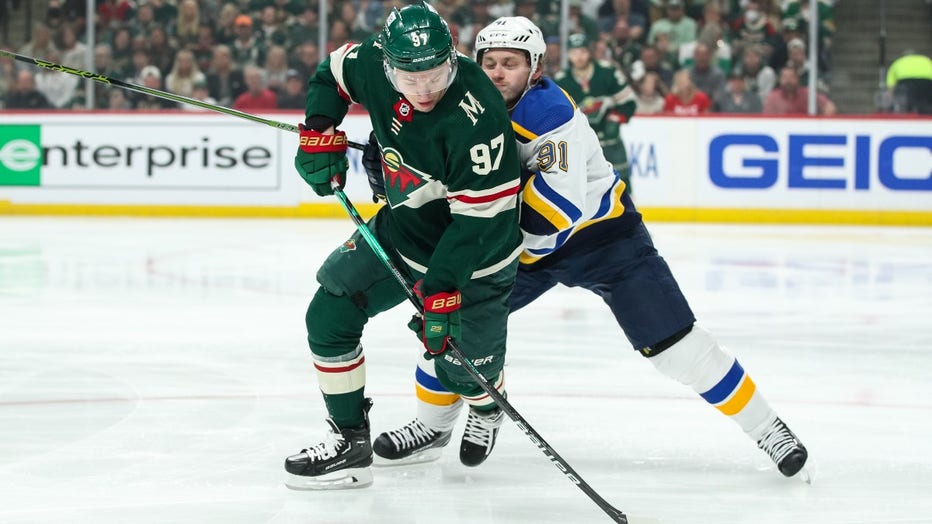 Vladimir Tarasenko #91 of the St. Louis Blues checks Kirill Kaprizov #97 of the Minnesota Wild in the first period in Game Five of the First Round of the 2022 Stanley Cup Playoffs at Xcel Energy Center on May 10, 2022 in St Paul, Minnesota.  ((Photo by David Berding/Getty Images))

One of his toughest decisions might be who starts in net, between Marc-Andre Fleury and Cam Talbot. Fleury has had ups and downs through five games. He hasn’t single-handedly lost the Wild games, but also hasn’t won games by himself.

Talbot finished the regular season 13-0-3 in his last 16 starts, but had to sit and watch from the bench as the Blues won Game 1 4-0, and Games 4 and 5 5-2. In five playoff games, Fleury has a 3.04 goals against average and a .906 save percentage. Evason wouldn’t say who will play Thursday, but said both will be ready.

"We trust both our goaltenders. We’ve seen enough of Marc-Andre Fleury to know that he’s a guy that responds correctly. We also know that Cam Talbot is the ultimate professional, he works his butt off if he’s playing or not playing, would be ready to go tomorrow night as well," Evason said.

The Wild came back from a 3-1 deficit against the Vegas Golden Knights last year to force Game 7 before having their season end. The Game 6 goalie for Minnesota in that 3-0 win? Talbot. The goalie for Vegas? Fleury.

The Wild also needs more balanced scoring. Kirill Kaprizov leads the NHL with seven playoff goals, a mark that also made Wild playoff history, after scoring a pair of power-play goals Tuesday night. He’s got seven of the Wild’s 15 goals through five games.

After Kaprizov, Joel Eriksson Ek has three goals. Mats Zuccarello, Jonas Brodin, Jordan Greenway, Freddy Gaudrau and Matt Boldy all have one. Kevin Fiala had 33 goals in the regular season, but has been limited to just three assists against the Blues. Ryan Hartman, who had 34 goals, hasn’t scored and has five assists.

The Wild needs players not named Kaprizov to get the puck in the net if they have aspirations of playing the Colorado Avalanche in the Western Conference Semifinals.

"We definitely have to find second, third, secondary scoring. Balanced scoring like we have all year. We definitely need to have other people on our team chip in for sure," Evason said. "It might not happen every night, but it might tomorrow and we have to expect that to happen."

The Wild isn’t thinking or talking as if the season might end Thursday night. They want to give themselves a chance with a Game 7 in front of their home fans.

"We’re looking to go there and win," Spurgeon said.