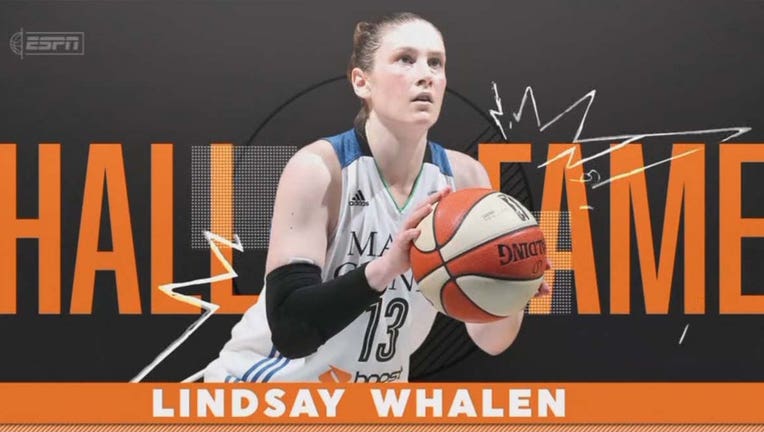 MINNEAPOLIS - Lindsay Whalen is a first ballot selection to the Naismith Basketball Hall of Fame, and she’ll have a pair of legends presenting her when she officially gets the honor next month.

Officials announced Monday Whalen will be presented by legendary player and coach Dawn Staley, and former NBA star and current analyst Charles Barkley. Staley was inducted to the Hall of Fame in 2013, and Barkley was inducted in 2006.

Lindsay Whalen was quarantined in her Twin Cities home with COVID-19 last Monday when she got a call that would change her life forever.

Whalen will officially join the Naismith Basketball Hall of Fame at an enshrinement ceremony on Saturday, Sept. 10, which will include more than 50 Hall of Famers. Whalen got to choose who her presenters would be as part of the ceremony.

Whalen is the first Gophers women’s basketball player, and seventh overall from Minnesota, to join the Hall of Fame. She joins Kevin McHale, who was inducted in 1999, and Lou Hudson, who is going in along with Whalen this year.

Whalen finished her Gophers’ playing career as the program’s all-time leading scorer, second in assists and third in steals. She led Minnesota to its only NCAA Women’s Final Four in 2004, and was a four-time All-State selection at Hutchinson.

After starting her WNBA career with the Connecticut Sun, she came to the Lynx and won four WNBA titles. She’s a six-time All-Star, three-time All-WNBA First-Team pick and is the league’s all-time leader with 307 career wins. Whalen averaged 11.5 points, 4.9 assists, 3.8 rebounds and one steal per game in 15 professional seasons.