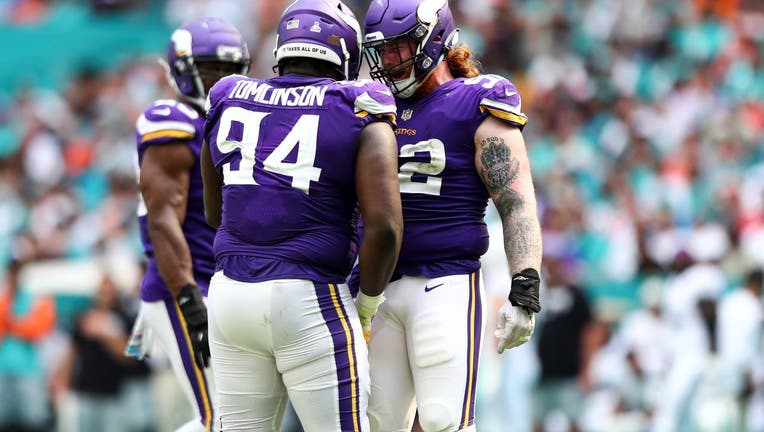 MIAMI GARDENS, FL - OCTOBER 16: Dalvin Tomlinson #94 of the Minnesota Vikings celebrates with James Lynch #92 after a play during an NFL football game against the Miami Dolphins at Hard Rock Stadium on October 16, 2022 in Miami Gardens, Florida. (Pho (Getty Images)

The Vikings dropped to 8-2 on the season after a 40-3 loss to the Dallas Cowboys. We’ll find out Thursday night if it was a one-game outlier, or if it’s just the start of a troubling trend.

The Vikings will again be without defensive tackle Dalvin Tomlinson against the Patriots. He’s been dealing with a calf injury and went through a pregame workout at U.S. Bank Stadium, but was declared inactive 90 minutes before kickoff. He’ll miss his fourth straight game, and the Vikings’ run defense has struggled without him.

Also inactive are defensive backs Andrew Booth Jr., and Akayleb Evans, who is out with a concussion. With Cam Dantzler on injured reserve due to an ankle injury, the Vikings are thin in the secondary. Duke Shelley, who made two big plays late in the win at Buffalo, will start alongside Patrick Peterson and Chandon Sullivan. The Vikings also elevated defensive back Tay Gowan from the practice squad, and Kris Boyd could see defensive snaps.

Christian Darrisaw is also out Thursday night due to suffering a concussion against the Cowboys. Blake Brandel will start in his place.