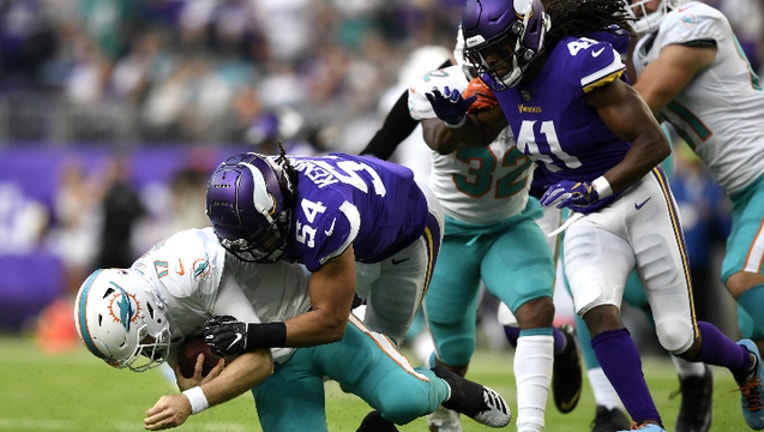 MINNEAPOLIS, MN - DECEMBER 16: Ryan Tannehill #17 of the Miami Dolphins is sacked by Eric Kendricks #54 of the Minnesota Vikings in the third quarter of the game. (Photo by Hannah Foslien/Getty Images)

MINNEAPOLIS (FOX 9) - Five more Minnesota Vikings players are headed to Orlando, Florida this week after being selected to participate in the Pro Bowl.

San Francisco defensive end Nick Bosa, fullback Kyle Juszczyk and cornerback Richard Sherman are also missing the Pro Bowl to get ready for the Super Bowl. Griffen, Ham and Rhodes are their replacements.

Cousins is making his second Pro Bowl appearance after throwing for more than 3,600 yards and 26 touchdowns this season. He becmae the first quarterback in NFL history to have at least 300 passing yards and a 130.0 passer rating in three straight games. He tied for the league lead with nine games of a passer rating of at least 100,l and became the third-fastest player in league history to complete 2,000 passes.

Cousins the second quarterback to be named to the Pro Bowl under Mike Zimmer, and first since Teddy Bridgewater. His 56 touchdown passes with the Vikings is the most in a player's first two seasons with the organization.

Kendricks, after being named All-Pro at linebacker, led the Vikings’ defense with 110 tackles. It’s the fifth straight season he’s led Minnesota’s defense in tackles. He tied for the NFL lead among linebackers with 12 passes defended.

Griffen is making his fourth Pro Bowl appearance in five years after finishing the season with eight sacks and 11 tackles for a loss. His 24 quarterback hits this year tied for eighth in the NFL. He had a bounce back season after missing five games during the 2018 season to address concerns for his mental health.

Griffen is seventh in Vikings' history with 74.5 sacks, and his 57 since the start of the 2014 season ranks ninth in the NFL.

Ham started eight games and recorded a personal best 17 catches for 149 yards this season. One of those catches was his second career touchdown in Minnesota’s win at Detroit. It's Ham's first Pro Bowl selection.

Rhodes is a three-time Pro-Bowler and finished this season with 63 tackles, six passes defended, five tackles for a loss and forced a fumble. He started 15 games this season and played his 100th career game against the Broncos. He's got 10 interceptions since 2013, third-most in the NFL among active cornerbacks.

He tied Carl Lee and Antoine Winfield with his third Pro Bowl selection.

The Vikings will have eight players in the Pro Bowl, joining running back Dalvin Cook, defensive end Danielle Hunter and safety Harrison Smith. The Pro Bowl will be played at 2 p.m. Sunday in Orlando.