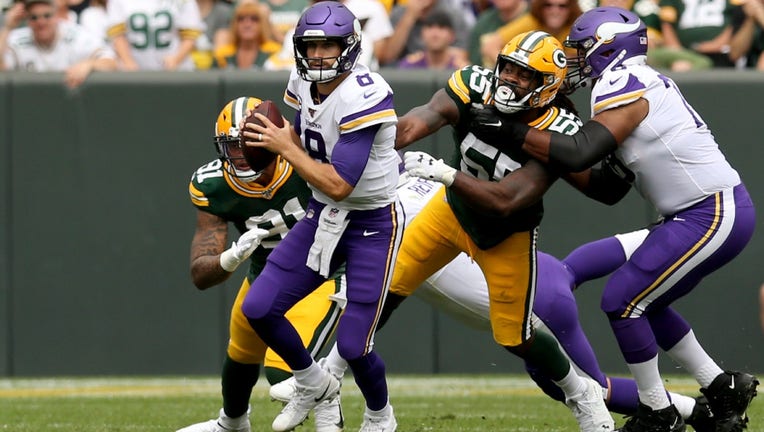 Quarterback Kirk Cousins #8 of the Minnesota Vikings runs the ball against the Green Bay Packers in the game at Lambeau Field on September 15, 2019 in Green Bay, Wisconsin. (Photo by Dylan Buell/Getty Images)

MINNEAPOLIS - The Minnesota Vikings dropped to 1-1 on the season after a 21-16 loss at Green Bay Sunday afternoon, and Kirk Cousins wishes he had one throw back that ultimately cost the Vikings a chance for a road win against their biggest NFC North rival.

The Vikings were in position for the go-ahead touchdown at Lambeau Field on the Packers’ 8-yard line on first-and-goal with about five minutes to play. Cousins dropped back, went 15 yards behind the line of scrimmage and threw off his back foot to the back corner of the end zone for Stefon Diggs. The pass was intercepted by Kevin King, and the Packers hung on for the victory.

Cousins owned up to his mistake after the game, calling the loss "gut-wrenching" and saying his play "wasn't good enough to expect to win."

That’s after the Vikings had run the ball seven times for 48 yards on the drive, and got to the 8-yard line after Alexander Mattison ran for 14 yards. After getting down 21-0 early, the Vikings put themselves in position to take the lead before Cousins’ costly throw.

"There’s no justification, there’s no defense to be made. It was unacceptable. It put my team in a terrible position," Cousins said. "We had worked so hard to get down there, had a great chance to take the lead, potentially win the game. I just took it out of our hands by making that throw."

Cousins, now in the second season of a three-year, $84 million fully-guaranteed contract, finished the day 14-of-32 for 213 yards, one touchdown, two interceptions and two fumbles. His first interception came on a throw to Stefon Diggs in the first quarter in triple coverage on third down.

"Today he made a couple mistakes. The guy made some great throws as well. He’s got all the talent, we just need to continue to coach him the way we want him to play," Vikings coach Mike Zimmer said.

Dalvin Cook was yet again the Vikings’ offensive star in the game with 20 carries for 154 yards and a 75-yard touchdown that got Minnesota on the board in the second quarter.

The Vikings got hit in the mouth early by Green Bay, which opened the game with touchdowns on three straight drives to take a 21-0 lead after scoring just 10 points in a win at Chicago last week. Aaron Rodgers found Davante Adams for a 39-yard pass on the first play of the game. The drive ended with a Rodgers’s 15-yard touchdown pass to Jamaal Williams. It was the first opening drive touchdown pass for Rodgers against the Vikings since 2013, before Zimmer was the head coach.

Green Bay’s second touchdown came after Dan Bailey missed a 47-yard field goal wide left on Minnesota’s first possession. Rodgers converted on three third down plays, and he found Geronimo Allison for a 12-yard touchdown and a 14-0 Packers’ lead in the first quarter.

Things got worse before they got better. The Packers got the ball back at Minnesota’s 33-yard line after Cousins was sacked and fumbled. It was one of two fumbles on the day for Cousins.

The Packers capitalized on the turnover with a 4-play, 33-yard drive, capped by Aaron Jones’s 2-yard touchdown run. After as good a start as you can ask for last week, the Vikings were down 21-0 early in the second quarter.

The Packers ran 17 plays in the first quarter for 167 yards and two touchdowns.

“We knew they’d start fast. They had us off balance,” Zimmer said.

Chad Beebe set up a second quarter scoring drive with a 61-yard pass from Cousins down to the Packers’ 3-yard line. Cousins then appeared to hit Diggs for a touchdown, and after a review, Cook was flagged for blocking a Green Bay defender during the throw. Touchdown negated, and the Vikings were forced to settle for a Dan Bailey 31-yard field goal.

Cook’s penalty was one of three offensive pass interference penalties on the Vikings, who became the first team this year to have a touchdown negated by such a play.

The Vikings got within 21-16 in the third quarter after Cousins hit Diggs for a 45-yard touchdown down the middle of the field. Diggs then took of his helmet, jawed a Green Bay fans and was flagged 15 yards for unsportsmanlike conduct. Bailey’s 48-yard extra point missed after being tipped at the line of scrimmage.

"The penalty after the touchdown, just selfish," Zimmer said.

The Vikings had eight penalties for 100 yards in the loss, uncharacteristic of a normally disciplined team under Zimmer.

After scoring on their first three drives, the Packers were held without a point the rest of the game. Their last five drives of the first half finished with a fumble, three punts and a turnover on downs. Their second half shutout gave the Vikings multiple chances to win the game.

It was a game of missed opportunities for the Vikings, who ran 27 times for 7.3 yards per carry against the improved Packers’ defense. The Vikings out-gained the Packers 421-335 and averaged seven yards per play to Green Bay’s 4.9. Rodgers finished the day 22-of-34 for 230 yards and one touchdown.

The Vikings have to move on quickly. They host the Oakland Raiders next Sunday at U.S. Bank Stadium.

"We fought our rear ends off. We just didn’t make enough plays to win the football game," Zimmer said.