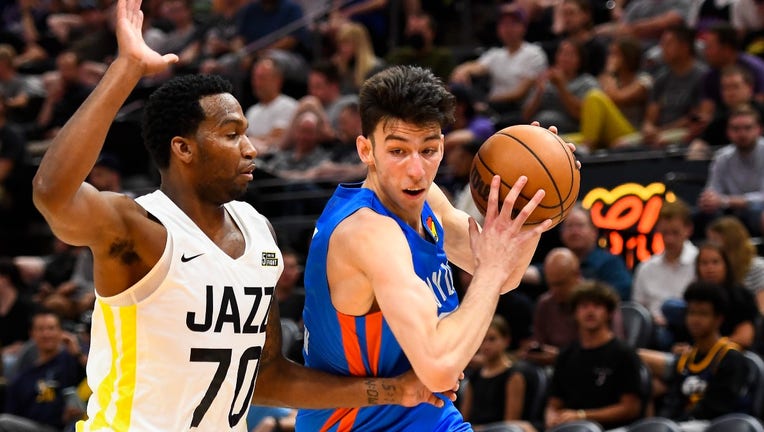 Chet Holmgren #7 of the Oklahoma City Thunder drives against Vic Law #70 of the Utah Jazz during a NBA Summer League game at Vivint Arena on July 05, 2022 in Salt Lake City, Utah. ((Photo by Alex Goodlett/Getty Images))

MINNEAPOLIS - If his NBA Summer League debut is any indication, Chet Holmgren is just getting started on his way to becoming a star with the Oklahoma City Thunder.

Holmgren, the Twin Cities native taken No. 2 overall in the NBA Draft, threw down a two-handed dunk for his first points as a pro as the Thunder beat the Utah Jazz 98-77. Holmgren showed the versatility and skills that made him a star at Minnehaha Academy and an All-American in just one season at Gonzaga.

Holmgren was the best player on the floor Tuesday night, and it wasn’t all that close. He finished with 23 points, shooting 7-of-9 from the field, including 4-of-6 from the perimeter. He grabbed seven rebounds, tied a Summer League record with six blocks, and had four assists in just 23 minutes on the floor.

It had many who follow basketball and sports around the world buzzing on social media.

Holmgren was surprised to learn after the game the six blocked shots tied a Summer League record. He told ESPN’s Holly Rowe post game he plans on breaking that mark.