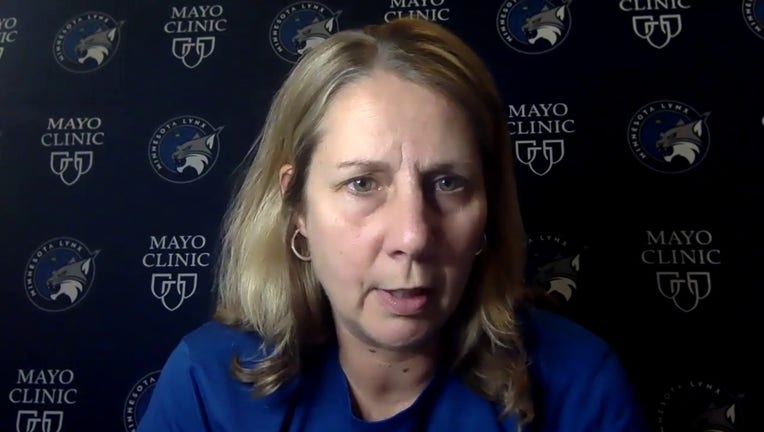 Lynx coach Cheryl Reeve will serve as an assistant coach for the USA Women's Basketball team in next month's Summer Olympics in Tokyo. She'll be joined by Lynx players Sylvia Fowles and Napheesa Collier.

MINNEAPOLIS - There may not be a greater honor for an athlete or coach than getting the opportunity to represent their country in sports.

The 2021 Summer Olympics, set for Tokyo, Japan starting late next month, are a year late because of the COVID-19 pandemic. Right now, Olympics fans are consumed by watching athletes in swimming, track and field and other sports battle for coveted spots on Team USA.

Three members of the Minnesota Lynx will represent the USA in women's basketball next month in Tokyo. For two of them, it’s nothing new but still an incredible experience. For one, it’s the first chance for the opportunity of a lifetime. Lynx coach and GM Cheryl Reeve is on the USA coaching staff as an assistant for Dawn Staley, and current teammates Sylvia Fowles and Napheesa Collier will get to share the Olympic experience together as players.

Sylvia Fowles, Napheesa Collier and Cheryl Reeve will represent the Minnesota Lynx on Team USA at next month's Summer Olympics in Tokyo.

For the second straight Olympics, Reeve will share the experience with current players on the Lynx roster. Back in 2016, it was Maya Moore, Seimone Augustus and Fowles helping lead the Americans to Gold.

This time around, Fowles is chasing her fourth Gold, and Collier is a first-time Olympian.

"Anything you can do and experience in life, it’s who you do it with. I'm just felt really fortunate, both the first time and now this time, to have Lynx players along for the ride or be along for their ride," Reeve said.

Earlier this week, Fowles said "it was still surreal" to be heading to the Olympics. It probably wasn't a surprise, as it’s her fourth straight trip and it might be her last. She’s 80-4 all-time playing for USA Basketball.

"You never want to get ahead of yourself and get too comfortable in the position that you’re in. To even be in the pool of being named to my fourth Olympic team, I’m very proud of myself. It’s still a surreal moment," Fowles said.

The Lynx were traveling recently when Collier’s phone rang. It was Carol Callan, National Director with USA Basketball. Collier stayed on the bus while teammates got off. A dream since she started playing basketball was coming true, she was chosen for the Olympic team less than three full years into her WNBA career.

"Obviously I’ve watched the Olympics since I can remember and to think that one day I would be on that team, it’s been a dream since 2013. Even before that, making the Olympics one day was a huge goal. To say that I’m here is crazy," Collier said.

"The team surrounded her and cheered her on and hugs and all that good stuff. We’re certainly really, really proud of her," Reeve said.

Cheryl Reeve has won at a high level in every level of basketball she’s been involved in. She’s won four WNBA titles with the Minnesota Lynx, compiling a 245-117 coaching record entering the 2021 season. She was on the coaching staff for the 2016 Olympic team that won a Gold medal. She won FIBA World Cup Gold medals in 2014, and most recently in 2016, which got USA to the current Olympics.

Team USA has some of the best athletes in the world, but it still takes a coaching staff to mesh the chemistry together. When Dawn Staley approached Reeve about being on the staff, it was a no-brainer.

"Obviously a great honor. I said to Dawn I was there for her if she thought I could be helpful. Obviously it’s a great privilege and I’m excited to have a chance to go to Tokyo," Reeve said Wednesday.

Team USA will be seeking its fourth straight Gold medal, and sixth in the last seven Olympics. The Americans won bronze in 2006.

With winning comes expectations, and with expectations come meeting a standard. The current squad features a mesh of veterans, including Fowles, going for their fourth straight gold, and first-timers, like Collier, who have yet to experience standing on the podium and listening to the National Anthem.

For the model that Team USA has built, it’s a failure to leave the Olympics with anything other than Gold. They’ll have the target on their backs for every game, which is what happens when since 1996, you've won five Gold medals in six tries. They've won three straight, and should be the favorite to win a fourth.

The 12 current players on the roster carry a combined 60 Gold medals, and a 749-37 record in a USA uniform.

Team USA has 25 years of excellence in the Olympics, and hopefully counting.

"It’s something they’ve worked really hard for. You go back to when this thing first started, their run first started, the tremendous commitment that was made to those first teams that endured a tremendous amount of work and energy and passion poured into it. It’s evolved to what it is today," Reeve said. "The expectation is you stand on the shoulders of that first group and you do it with great work ethic, passion for what you’re doing, passion for your teammates and passion for your country. All that matters is winning. I think it’s absolutely incredible, and not talked about enough, this run that the USA women’s national team has been on for a long, long time. It’s very hard to do, it takes a lot of work, a lot of energy and a lot of people being tremendously committed to the program."

Reeve and Fowles will be seeking their fourth Gold medal, while Collier is going for her first.

The XXXII Olympic Games women’s basketball tournament will be held July 26-Aug. 8 at the Saitama Super Arena in Tokyo.