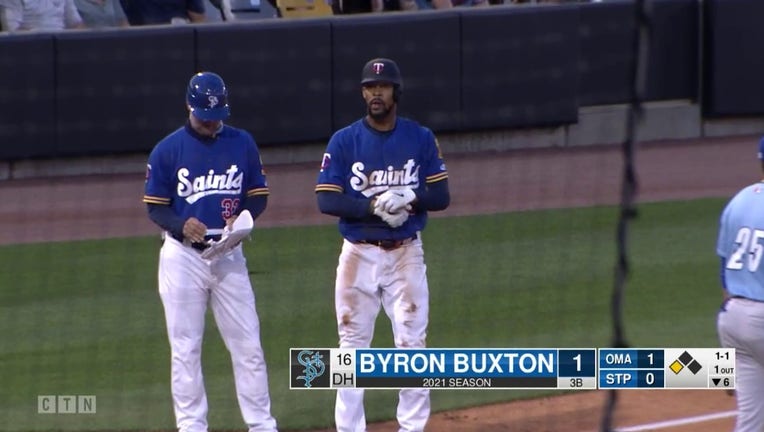 Twins CF Byron Buxton reached base three times, including a triple to right center, in a rehab stint with the St. Paul Saints Tuesday night against the Omaha Storm Chasers.

MINNEAPOLIS - It sure looks like Byron Buxton is ready to return to the Minnesota Twins after another stellar night at the plate for the St. Paul Saints on Thursday.

Buxton hit a pair of home runs and drove in five runs, though it didn’t come in a win as the Saints lost to the Omaha Storm Chasers 16-9 at CHS Field. Buxton hit a two-run homer to right in the bottom of the first, then launched a two-run shot to left center in the second.

Buxton added a sacrifice fly to deep center in the fourth, his final at-bat of the game. He finishes 2-for-2 with five RBI and scored two runs.

He did not play Wednesday night after the game started more than an hour late due to a downpour at CHS Field. He was first moved to designated hitter, then pulled from the lineup to avoid any chance of risking an injury on a wet field.

In Buxton’s first game back Tuesday night, he reached base three times, including a triple to right center. Buxton is working his way back from a hip strain that put him on the injured list, shortly after being named the American League Player of the Month for April.

Across the Mississippi River in St. Paul, the Twins delivered some ninth inning heroics to avoid getting swept by the New York Yankees. Trailing 5-3 entering the bottom of the ninth, Josh Donaldson tied the game, launching a two-run homer to left center off Aroldis Chapman. Two batters later, Nelson Cruz sent a game-winning, two-run blast over the center field wall.

The Twins host the Houston Astros for a three-game series at Target Field, starting Friday night.