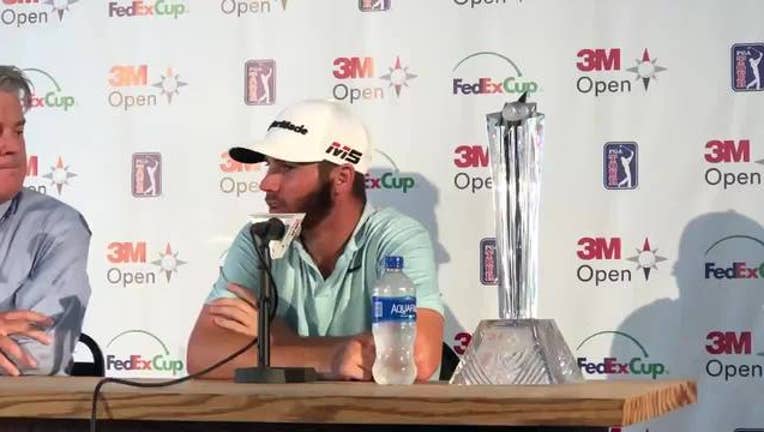 MINNEAPOLIS - The 3M Open is about a month away, and Tournament Director Hollis Cavner already has two of the biggest names in golf committed to playing at TPC Twin Cities in Blaine.

Tournament officials announced Tuesday that Brooks Koepka, Dustin Johnson and Matthew Wolff have all committed to the 3M Open, slated for July 23-26. Officials recently announced the event will be played without spectators due to concerns with the Coronavirus pandemic.

Koepka has made more than $30 million in career PGA Tour earnings. When the tour resumed play two weeks ago, Koepka finished in a tie for 32nd at the Charles Schwab Challenge, and finish seventh last week at the RBC Heritage at Harbor Town.

Koepka’s status should be monitored moving forward. He had to withdraw from this week’s Traveler’s Championship as his caddie tested positive for Covid-19.

Johnson is currently No. 6 in the World Golf Rankings, and next month will mark his first visit to TPC Twin Cities. He was last in Minnesota in 2016 for the Ryder Cup. Johnson has 20 career victories, won the 2016 U.S. Open, tied for second at last year’s Masters Tournament and was second at last year’s PGA Champinonship.

Johnson missed the cut two weeks ago at the Charles Schwab Challenge, and finished in tie for 17th at 15-under par last week at the RBC Heritage.

“We are super excited about two of the top six ranked players in the world, Dustin and Brooks, coming to Minnesota and playing this year. They are both great guys and tremendous golfers,” Cavner said.

Also returning to the 3M Open field is last year’s defending champion, Matthew Wolff. It was his first career win in now 20 events played, and he’s made 16 cuts in his career. Wolff finished 54th at the Charles Schwab Challenge, and missed the cut last week.

Wolff was playing on a sponsor exemption at the 3M Open, and made a 26-foot eagle putt on the last hole to win by one shot at 21-over par over Bryson DeChambeau and Collin Morikawa.

Cavner is excited to have all three in Blaine next month.

“I cannot wait to see those two and Wolfie our defending champion going at it with the driver. They are all three as long as anyone on tour and all the top players in the world,” Cavner said.

Cavner says he hopes to pair all three in the same group at the 3M Open.

The hope is more big names commit to playing at TPC Twin Cities, with the 3M Open set for two weeks before the PGA Championship, the first major tournament to be held since Covid-19 stopped the sports world. It’s also a week after the Memorial Tournament, and the World Golf Championships FedEx St. Jude Classic is the week after.