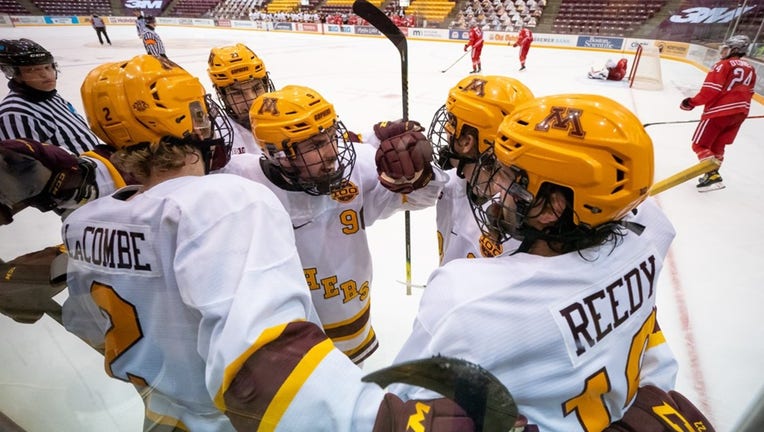 The No. 2-ranked Gophers men's hockey team hosts No. 11-ranked Wisconsin this weekend in a battle of the Big Ten's top two teams. ((credit: University of Minnesota Athletics))

Facing rival Wisconsin is enough to stay engaged in the week of preparations, but it’s also a battle of the top two teams in the Big Ten. If it weren’t for the COVID-19 pandemic, 3M at Mariucci Arena would be a busy place this weekend.

Instead, the No. 2-ranked Gophers and No. 11-ranked Badgers will play in a mostly empty arena Friday and Saturday night.

"If this were a normal year, they would be coming out of the rafters this week. Unfortunately we’re not going to see that," Gophers coach Bob Motzko said.

Minnesota appears to be back to its business-like approach as they Badgers visit Minneapolis. The Gophers have won four straight since getting swept on their home ice by Notre Dame. They out-scored Arizona State 20-2 the following weekend, and put their skill and talent on display last weekend in a sweep at Ohio State.

The Gophers improved to 15-3 overall, and 11-3 in the Big Ten, with 5-1 and 5-2 wins over the Buckeyes. Minnesota is atop the Big Ten standings at 33 points, but Wisconsin is lurking at 28 points. This weekend serves as a chance for separation for Minnesota, and for the Badgers, a chance to get back in the conference title hunt.

"We’ve got to be ready go to, got to be dialed in and take care of business. Right now we’re first place, they’re the second place team in the Big Ten so it’s a huge weekend," said forward Sampo Ranta, who leads Minnesota with 10 goals through 15 games. "These are the games we live for. These are the games we dream about winning as little kids. It’s just so fun to play."

The Badgers come in playing some of their best hockey of the season. They’ve won five of their last six, and swept Michigan State last weekend.

There’s not a lot that has to be said among the Gophers this week. It’s rivalry week, and the top spot in the Big Ten is on the line.

"I think our team and myself is going to be ready to go no matter what. If you don’t get up for this, I don’t know what you would get up for," defenseman Robby Stucker said.

It’s a Border Battle weekend between a pair of top 15 teams. When the two teams met in Madison back in early January, the Gophers lost Saturday 3-1 before bouncing back Sunday with a 5-3 win to come home with a split.

You can’t ask for a much bigger weekend in early February. And if that’s not enough, the top two teams in women’s college hockey, the Gophers and Badgers, are also playing this weekend down the block at Ridder Arena.

Motzko knows how critical this weekend is, but so are the four weekends after it.

"There’s no question that there’s always going to be a little more excitement in the air when you’ve got your top rival coming in," Motzko said. "We have 10 games to go, five weekends, and I’ve never liked putting more pressure on one weekend than another. I like to have a business approach to it."

That business-like approach has the Gophers on a four-game win streak and ranked No. 2 in the country.