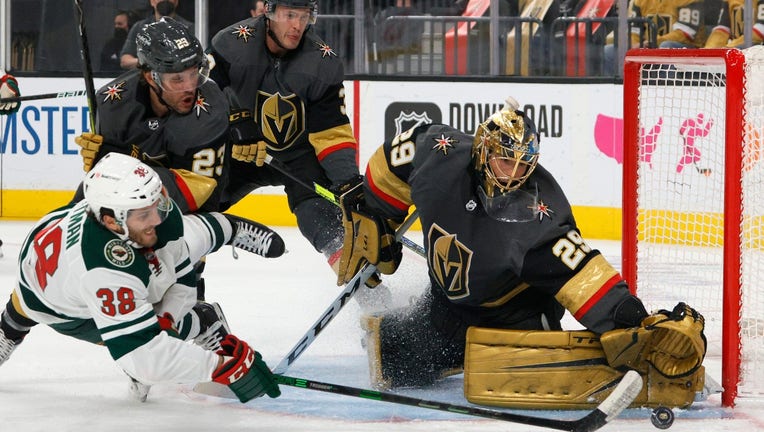 MINNEAPOLIS - It’s hard to ever be disappointed with a split on the road in the NHL Playoffs, and the Minnesota Wild head home to take on the Vegas Golden Knights in Game 3 Thursday night with the series tied 1-1.

But the Wild played one of its best games of the season Tuesday night, only to leave the ice after losing 3-1. The Golden Knights are riding a hot goaltender in Marc-Andre Fleury. He made 34 saves, and many of them were point blank scoring chances.

Only Matt Dumba got one past Fleury Tuesday night, and he did it with Marcus Foligno screening the 36-year-old goalie. So what do you do other than tip your cap to Fleury?

"You have a suggestion?" Wild coach Dean Evason joked with reporters Wednesday morning before the team flew home. "I got so many texts last night of how great he was. He was, both goaltenders have been absolutely phenomenal. These guys are so good, if they see the puck and it’s a clear-sighted shot, they’re going to make saves. We just have to continue getting second, third opportunities. Those are the ones that are going to go in the net."

It’s a simple concept on the surface: You can't stop what you can't see. The Wild won’t change its approach heading into Game 3, they just want to execute it better. Get pucks to Fleury, get traffic in front of him, disrupt his vision, capitalize on rebounds and get a little lucky.

When Fleury wasn’t making back-breaking saves Tuesday, he got his own luck. Victor Rask hit the crossbar on a shot that would’ve tied the game in the third period.

It would be easy to get frustrated, but they say they have to keep pushing.

"The way that we played, we have to continue to play that way. We’re comfortable in those tight games, that’s how we have to keep them. We’ll get our bounces, we’ve just got to continue to do the right things and be creative and try to get pucks and bodies to the net," defenseman Ryan Suter said.

Their top offensive players also have to get on the score sheet. Kirill Kaprizov and Kevin Fiala have yet to register a point in the series. Kaprizov leads the Wild in points as a rookie, but has five shots and no goals through two games. He also committed a costly tripping penalty with 90 seconds to play that led the Golden Knights seal the win on Alex Tuch’s second goal.

Fiala has had several good chances, and has yet to cash in.

"What can we do? Keep pushing. I feel comfortable for the whole team that we are going to score goals," Fiala said.

The Wild was the better team Tuesday, they just didn’t come home with the win. Now, they’ll play in front of as many as 4,500 fans Thursday and Saturday in Games 3 and 4. They were one of the best home teams in the NHL this season, at 21-5-2.

But they can’t win if they don’t find a way to get the puck past Fleury.

"No different than any other goaltender or game, you always talk about getting in front of him and taking his eyes away and all that good stuff. We just have to keep going," Evason said.

One of the main questions before the puck drops Thursday is the status of veteran forward Zach Parise. He was a healthy scratch for Games 1 and 2. Parise has had a frustrating season, being benched twice, and had to sit out nearly two weeks after being put on the NHL’s COVID-19 List.

Evason didn’t hint at any lineup changes before Thursday, saying they’ll watch the tape and have conversations among the staff before making a decision. It’s hard to imagine Parise not playing in the series at some point.