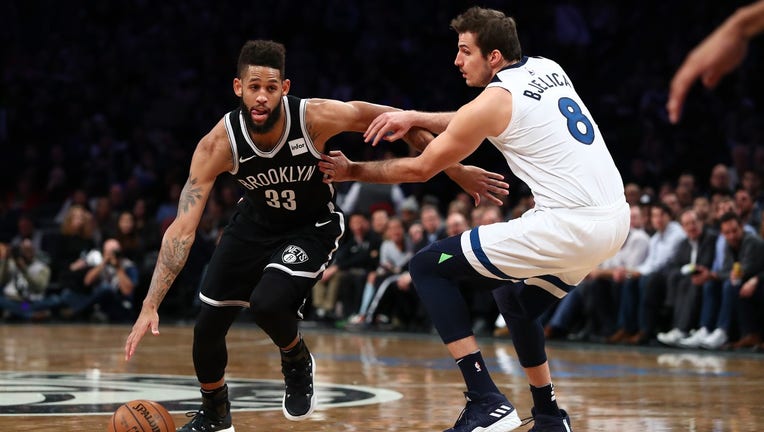 Allen Crabbe #33 of the Brooklyn Nets drives against Nemanja Bjelica #8 of the Minnesota Timberwolves during their game at Barclays Center on January 3, 2018 in New York City. ( (Photo by Al Bello/Getty Images) )

MINNEAPOLIS - Allen Crabbe was in practice with the Atlanta Hawks late last week when he got pulled aside.

It wasn’t a teaching moment for the 27-year old shooting guard in the middle of his seventh NBA season. He was being traded, as the Minnesota Timberwolves found another team willing to take on veteran guard Jeff Teague.

Teague and Treveon Graham were headed to Atlanta, while Crabbe was combing to Minneapolis to provide a veteran presence and help on the perimeter. After battling food poisoning over the weekend, Crabbe was at the team’s shoot-around ahead of Monday night’s game against the Denver Nuggets.

Crabbe, who was averaging 5.1 points and shooting 32.3 percent from the perimeter in 28 games with the Hawks, was caught by surprise at the trade.

“Definitely was a shock to me, but it’s not my first time being traded. It’s the business side. The only thing you’ve got to do is just pack up, get to your new team, try to get implemented quickly and just come out here and show up and go to work,” Crabbe said.

For his career, Crabbe is a 38.9 percent shooter from three-point range in 372 games. In his first four seasons in Portland, he shot 41.1 percent from the perimeter.

He welcomes the change of coming to Minnesota, a team changing its offensive identity and putting more emphasis on perimeter shooting.

“Match made in heaven. They like to shoot 3s, I love to shoot 3s, so I can’t ask for anything better than that,” Crabbe said. “I’m going to show up every day and be a professional, be the best teammate I can be.”

It helps that he’s not completely unknown to the organization. He’s never been to Minnesota, other than road trips with other teams, but has familiarity with current Wolves players Shabazz Napier, Noah Vonleh and Jake Layman. Crabbed played with Napier in Brooklyn, and with Vonleh and Layman in Portland.

Ryan Saunders hasn’t gotten to see much of him yet, but likes adding another veteran to the lineup. Saunders said he anticipates Crabbe playing Monday night against the Nuggets.

“I think he brings definite shooting help. He brings a veteran presence too, and just a guy who kind of knows where to be within the offense. That can really help a young group,” Saunders said.

The reality for the Timberwolves is they are still a work in progress in Saunders’ first full season as head coach, with Gersson Rosas in charge of the front office. They’re 15-27 through 42 games, with Karl-Anthony Towns missing 15 straight games due to a knee injury that they’re fortunate wasn’t worse. They’re also only five games out of the No. 8 spot in the Western Conference Playoffs, with 40 games to play.

The Wolves are ninth in the NBA in 3-pointers made, fifth in 3-pointers attempted and second to last in the league in percentage (32.2 percent).

Minnesota needs shooters, and Crabbe will get his chance to be in the Wolves’ rotation.

“It’s my job to bring in as much talent as possible so guys can compete. That’s the kind of system we want to have. He’ll be given every opportunity, he’s got the right and the ability to fit into what we want to play. Coach will give him a shot, but competition is good for us at that position,” Rosas said.

One of the biggest adjustments Crabbe will have to make the rest of the year has nothing to do with basketball. It takes a special breed, if you’re not a Minnesotan, to handle winter. Snow is nothing new to Crabbe, but cold and sub-zero wind chills are another conversation.

“I can definitely tell the difference between the cold. It’s very cold, I’m outside five minutes and my feet are already numb, face is numb, so I definitely need to go get some better clothes,” Crabbe said.