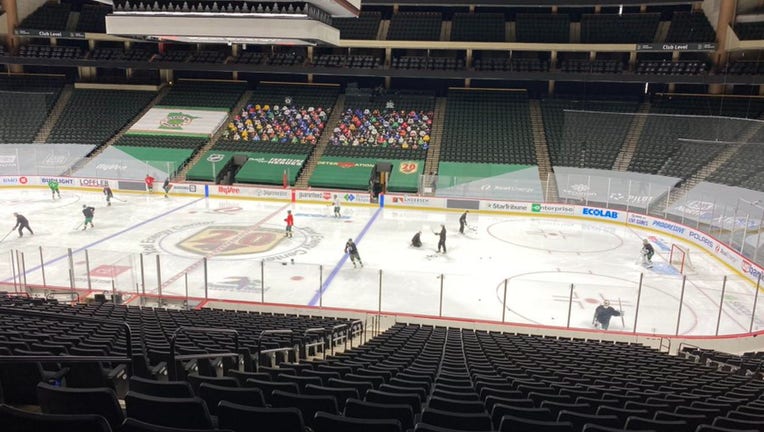 The Minnesota Wild held its first practice in 10 days on Friday Xcel Energy Center with 16 players available while the team continues to deal with COVID-19 issues.

MINNEAPOLIS - It was a sight for sore eyes Friday morning at Xcel Energy Center in St. Paul: The Minnesota Wild had 14 skaters and two goalies on the ice for practice.

For the first time in 10 days, Wild players that weren’t on the COVID-19 list and are otherwise healthy laced up their skates and worked out. The NHL put the Wild’s season on pause last week after six players were put on the league’s COVID-19 list.

Being placed on the list generally means a player has tested positive, or come in close contact with a carrier. At its height, the Wild had 12 players on the COVID-19 list. To be removed, a player has to not have symptoms for 10 days, or if asymptomatic, be 10 days removed from their last positive test.

Wild General Manager Bill Guerin said Friday, after the team’s first practice since being paused, all indications are that they’ll be in Los Angeles Tuesday night to face the Kings. The Wild has had six games postponed due to COVID-19 issues.

"The good thing is that we’ve turned a corner and things are looking good for us moving forward and players are getting healthy. That’s the important thing right now," Guerin said.

Slowly but surely, Guerin says they're expected to come off the list and return to practice.

Coach Dean Evason hinted that a few more players could be back at practice as early as Saturday. The Wild has workouts Saturday and Sunday ahead of Tuesday’s game at L.A.

"We tried to stay as positive as we possibly could, we’re fortunate here to have some time to practice before we project to get going," Evason said. "We get time to get the kinks out, get our legs back and get bodies back. There’s definitely positives involved in it for sure."

One of the happiest guys to be back on the ice? Foligno, who was the first to test positive for COVID-19. He admitted Friday he felt guilty, almost taking blame for the virus sweeping through the team. He thinks he contracted it from the team’s last series in L.A. at the end of January.

"When you get symptoms, you don’t know what to think. Being positive, the first one on the team is always tough. I felt really guilty, it’s kind of like you brought it in here," Foligno said. "You never want to be the first one, or just in general get it. It’s a guilty feeling, which is weird because you shouldn’t feel guilty. That’s just how it is. We’re playing through a pandemic, these things are going to happen."

Also back on the ice was Dumba, who has been out with what appeared to be a significant lower body injury. He said Friday he feels great and expects to play Tuesday.

It’s fair to assume the Wild lineup will look a lot different against the Kings. They’ll have to wait for regular players to get off the COVID-19 list, and get their legs under them before they play a game. They’ll rely on minor leaguers to fill gaps, something they’ve already done this season. They’ve seen Kyle Rau, Luke Johnson and Mayhew step in with others out.

"If that’s any indication of how our group reacts and acts when we get banged up a little bit or have Covid run through, then we feel very comfortable as an organization. Those three guys came in and gave us a real push," Evason said.

The Wild was about to start a four-game home stand when their season was put on pause. They’re 6-5-1 and in sixth in the Honda West at 12 points, but they’re just four points out of the No. 2 spot. They hope to get three games in next week to find they’re feet.

"When we get back on the ice, I expect us to be not only competitive, but play to win and hopefully we can just put this behind us," Guerin said.

"We’re very optimistic as a staff that our group, when the puck is dropped, will be ready to play," Evason said.