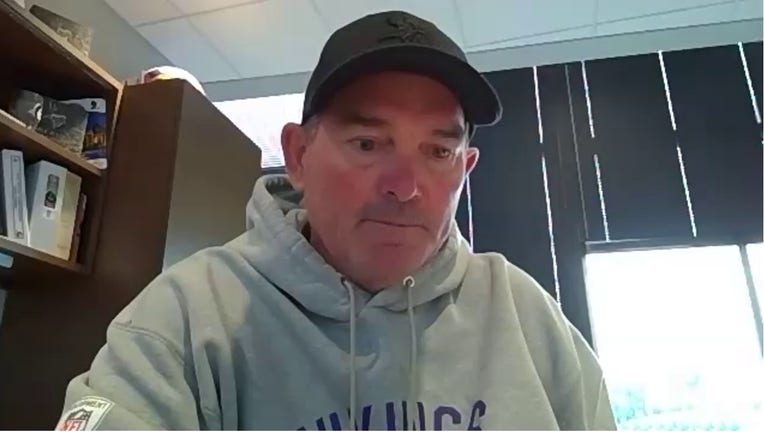 Mike Zimmer spoke with reporters on Saturday after signing a 3-year extension with the Vikings to stay in Minnesota as head coach.

MINNEAPOLIS - Mike Zimmer wants to bring a Super Bowl to the Minnesota Vikings, and he’s going to get at least another three years to try and deliver.

The Vikings announced last Friday they’ve signed Zimmer to a three-year extension. He’s now under contract with Minnesota through the 2023 season. Zimmer is 57-38-1 in six seasons with the Vikings and is 2-3 with Minnesota in the playoffs. They’ve made the postseason in three of his six years as head coach.

Thursday marked the first reporting day for training camp, which included solely a first round of COVID-19 testing.

“Everywhere he has been, he’s been a winner. There’s no question from ownership on down that he is the right head coach for this organization to get us to our ultimate goal, and that ultimate goal is winning the Super Bowl,” Vikings General Manager Rick Spielman said on Saturday via Zoom.

Zimmer was entering the final year of his current contract heading into the 2020 season before receiving the extension, and it was in the team’s best interest to get a deal done before Training Camp. Team owners Mark and Zygi Wilf issued statements before the Vikings playoff win over the New Orleans Saints last season, saying they had “every intent” to keep him as head coach.

It took some extra legwork due to the Covid-19 pandemic, but the deal is done and Zimmer is staying in Minnesota.

“I wanted to be here with the Vikings, I wanted to be here with the group we’ve put together, the front office, the coaches and the players so that was important to me that we were able to do that. Sometimes that takes a little bit of negotiations, but in the long run I think it was the perfect scenario for us,” Zimmer said. “There really wasn’t any time I didn’t feel like it was ever going to get done. I always felt like this was going to get done, it just took a little bit longer based on some of the outside things that happened.”

Zimmer is the third-winningest coach in Vikings history, and has led Minnesota to NFC North Division titles in 2015 and 2017.

Zimmer wouldn’t speculate on if it might be his final NFL contract. He’s 64 years old, and would be 68 when the extension ends. A lot can happen between now and then.

“I don’t want to make any decisions like that. I feel great, I love being around the players, going out on the field, I love game planning and doing all the things you have to do to get ready for the season. When it gets to that time, we’ll all make a decision,” Zimmer said. “This is a great opportunity that we have to continue to keep taking swings at what we need to swing at.”

He’s hoping that his top running back will be in Eagan on Tuesday when the rest of the veterans report for camp. Dalvin Cook announced earlier in the off-season that he was opting out of team activities and meetings until he could work out a new contract with the team. Zimmer expects Cook to be there when camp opens Wednesday.

Cook led the Vikings with 1,135 yards rushing and 13 touchdowns last year, despite missing two games and halves of two others with injuries. He was also the team’s No. 2 receiver for Kirk Cousins.

There’s been nothing normal about the Vikings’ off-season due to the Covid-19 pandemic. They picked a franchise-record 14 players in a virtual NFL Draft. There were no mini camps or organized team activities. They had a fully-virtual off-season, and it was up to players to work out on their own or find small-groups to stay in football shape.

Zimmer’s greatest challenge will be getting the Vikings ready for Week 1 against the Green Bay Packers, and they won’t have preseason games to work on things.

“We haven’t seen a lot of these guys in person since Jan. 13 with the veterans and we haven’t seen the rookies in person at all, so we’re going to have to start with the baby steps, the footwork and the hand placement, technique and getting those things so they can go out and play effectively in a football game,” Zimmer said.