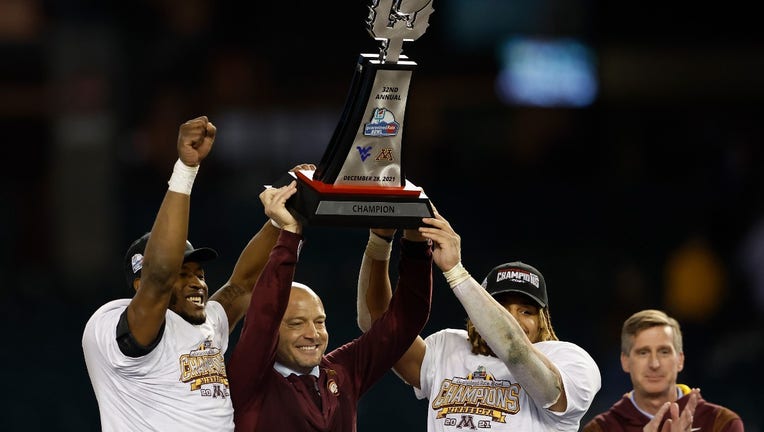 MINNEAPOLIS - The University of Minnesota football team ended its 2021 season with dominant performance in an 18-6 win over West Virginia Tuesday night in the Guaranteed Rate Bowl.

The Gophers finish the season 9-4, the fourth time in the last 100 years Minnesota has won at least nine games in a season. Two of those have now come under PJ Fleck in the last three years. Minnesota has now won 20 games the last two full seasons with Fleck leading the program.

It was a classic Fleck recipe for the bowl victory: Win in the trenches, dominate on defense and run the football. Here are six takeaways from the win.

DANIEL FAALELE GOES OUT IN STYLE

Daniel Faalele scored a big guy touchdown in the 2019 Spring Game. He threw for a touchdown in the 2021 Spring Game, and it happened in an actual game that counts in the Guaranteed Rate Bowl. Faalele lined up as the fullback from the 2-yard line, and there was no stopping the 380-pound offensive tackle when he got going forward. He scored the Gophers’ first touchdown of the night, and social media erupted. His teammates did too.

Faalele has played his last game with the Gophers Tuesday. He’s accepted an invite to the Senior Bowl, and will be the Gophers’ first offensive lineman drafted since 2006. Fleck is well aware of that, and sent Faalele out in style.

No Mo Ibrahim, no Trey Potts and no Bryce Williams for the Gophers, no problem. Ky Thomas ran for 144 yards and a touchdown, and Bucky Irving had 129 yards. Minnesota ran for 249 yards against West Virginia, and averaged nearly five yards per carry. Thomas and Irving each had 100-yard games for the third time this season, and Minnesota has had 13 100-yard games from five different running backs this year. The running back room will have plenty of depth in 2022, with Ibrahim, Williams and Potts all back.

His players call him "the guru," and if you didn’t already know why, you found out Tuesday. Joe Rossi’s defense had another dominant showing, limiting West Virginia to 206 total yards, 2.4 yards per carry, one score and just 3-of-13 on third down. They sacked Jarret Doege five times, with two from Esezi Otomewo and one each from Boye Mafe, Tyler Nubin and Jah Joyner.

Minnesota’s defense gave up 16 points or fewer in nine of 13 games this season, and Rossi signed a contract extension before the bowl game.

Tyler Nubin was named the defensive MVP after the bowl game, and deservedly so. He led the Gophers with eight tackles, a sack, a tackle for loss and a pass break-up. Fleck called him the most improved player on the defense throughout the season, and he’s shown why. Best of all, he’s one of the veterans back for the 2022 season.

The Gophers won their fifth straight bowl game Tuesday night, a school record. They also won their third bowl game under Fleck. Minnesota turned heads after beating Auburn in the Outback Bowl to finish the 2019 season 11-2. He led the Gophers to a 34-10 win over Georgia Tech in the 2018 Quick Lane Bowl. This year’s senior class led Minnesota to a 30-16 mark of the last four years, with 20 wins coming between 2019 and 2021.

The next step for Fleck’s program? Win the Big Ten West, and give yourself a chance at the Rose Bowl.

The only major fail of the night? The conditions at Chase Field, home of the Arizona Diamondbacks. Bowl officials inexplicably opened the roof, with it raining, before kickoff to let a pregame show involving paratroopers and fireworks go on as planned. New sod for the game, combined with rain, made for awful field conditions. Players slipped the whole night, often times making it look like an ice sheet. Tanner Morgan’s only real mistake of the night game because Michael Brown-Stephens fell down, and the pass was intercepted. Unacceptable for a bowl game to have those conditions in a stadium, with a roof, when it could’ve been prevented.