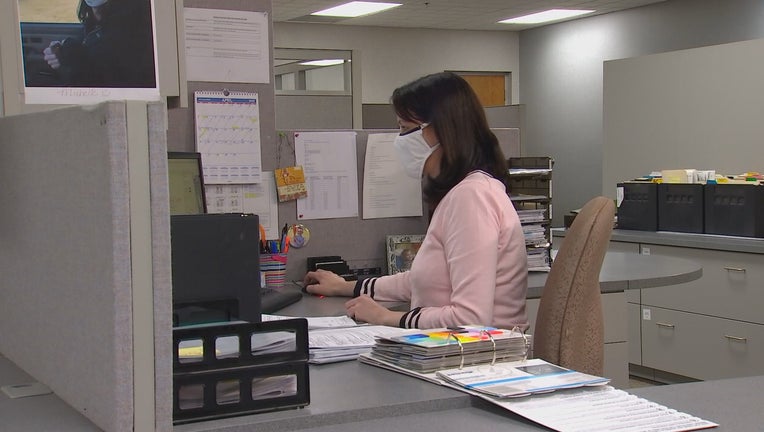 (FOX 9) - As Minnesota begins to wind down the lockdown the state has been under for nearly a month, some workers are being allowed back to work.

Under relaxed orders from Governor Tim Walz, office and industrials settings without community customer interaction are being allowed back to work.

As Minnesota begins to wind down the lockdown the state has been under for nearly a month, some workers are being allowed back to work.

The change comes to the delight of thousands of workers who had been furloughed due to the stay-at-home order.

"It feels good. I was glad to come back," said Michelle Trondson.

As a customer service rep for Indigo Signworks, Trondson is grateful to be back behind her desk. But some things are different in the office she has worked at for the last six years.

"We have a bigger space so we are able to keep some distance," she explained. "But it does take some getting used to not getting so close to everybody."

When Governor Walz issued his stay-at-home order, the custom sign making company shut down and furloughed about 70 workers in three locations in Minnesota because it wasn't considered an essential business.

Indigo was eventually able to change its classification and re-open two weeks later - but not before coming up with a social distancing plan for employees.

"People were concerned because the stay-at-home order was still in place, but we were able to communicate to them we have a plan in place and people will be adhering to it in the facility," said Kari Nuteson of Indigo.

In addition to allowing some employees to work from home and staggering schedules, employees must also wear masks whenever they are in the building. The company even put down six-foot markings around each cubicle so co-workers know how far they need to stay away to social distance properly.

"You go all these years working together and being in tight quarters and being able to talk to each other at a close distance," said Nuteson. "And teaching people six feet, it's a challenge."

For Trondson, being at work is a break from sitting at home worrying about the pandemic. But the changes at the office are a sign of the times that may be around for a while.

"I think business will pick up," she said. "I think things will get better. I think as we get used to it, it will be easier and it will be more routine and more day to day."