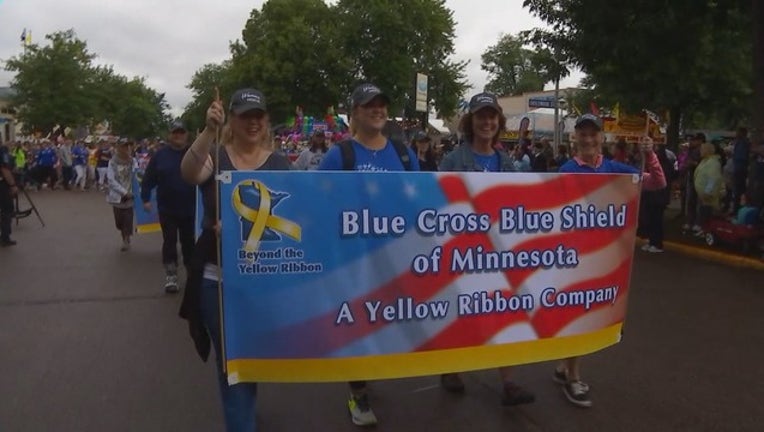 FALCON HEIGHTS, Minn. (KMSP) - As part of Military Appreciation Day at the Minnesota State Fair, the Fair honored the contributions of women in the military.

They wore grey hats that said “woman veteran” as they marched in the parade alongside their fellow veterans as well as yellow ribbon companies, which make an effort to hire veterans.

"This is a family,” said Tara Nauah, an Army National Guard Veteran. “I just had a conversation with somebody that I had never met before and we’re just talking like we’ve known each other forever. You never lose the military. It’s a family.”

Veteran Jodi Dehn just about has done it all, serving at the Pentagon in the ‘70s and later as a chaplain in the ‘90s.

“I wish there would be more women veterans here,” said Dehn. “As women veterans, you have a tendency to take a step back from the men that maybe we didn’t do as much as they did, but we really did."

First Sergeant Katie Blackwell, who has served for 20 years, is one of 2,500 women currently serving in the Minnesota National Guard.

“Minnesotans are really wonderful when it comes to supporting all the veterans,” said Blackwell. “I’ve never felt this much support, even walking around the Fair, I get stopped every 12 feet by someone who says thank you for your service and that means a lot to me and I know it means a lot to other veterans.”

The Minnesota National Guard says women make up 18 percent of its members, ranking it among the top five in the nation.