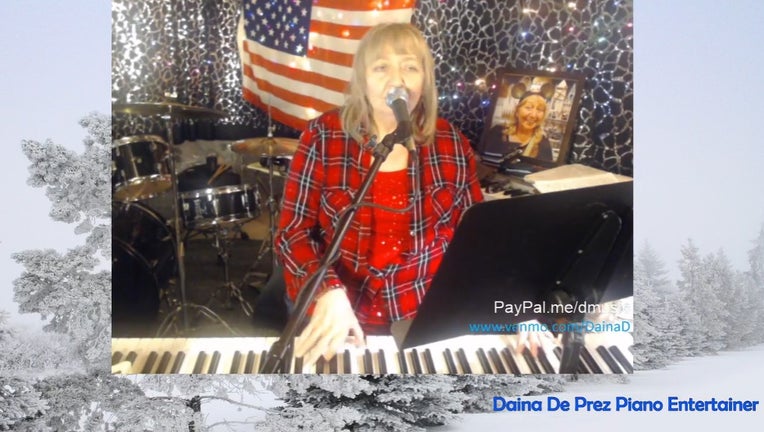 Online performances have allowed Daina to connect with her audiences despite the pandemic. (Daina De Prez Piano Entertainer / Facebook)

(FOX 9) - Going out on Friday nights hasn’t happened for a lot of people since pre-pandemic. But a well-known Twin Cities entertainer is proof the show must go on.

From singing her heart out from the sparkling stage set up in her basement, Daina De Prez has spent the pandemic determined not to let herself or her fans feel alone.

Going out on Friday nights hasn’t happened for a lot of people since pre-pandemic. But a well-known Twin Cities entertainer is proof the show must go on.

"An entertainer entertains and if there’s no place for an entertainer to entertain, you go to the platform where you can reach them," said Daina.

Daina is well known in the local music scene for playing to packed crowds at Nye’s piano bar and other gigs around the Twin Cities for decades. But now in her late 60s and after surviving a heart attack a few years ago, Daina decided back in April to face the technology and other challenges ahead of her.

Taking requests and playing some of her original songs through Facebook live streams became the safest option. "That’s what’s made me so freaked out about the virus is that I don’t think I would do extremely well if I got it."

Ninety shows later, including a few outdoors during the summer, many loyal listeners say they tune in twice a week for the music, laughter, and the communal experience.

"The next day I feel like I went out," said Larry Gerow. "It's nice to feel like you went out when you didn’t."

"Sometimes people donate and if they do, fine, if they don’t, fine, it’s a chance for us to get together," said Daina.

Virtual audiences range can reach into the thousands, including friends and family Daina has reconnected with around the world.

"It started out of panic, it’s become a labor of love. And it’s necessary for my sanity, and I like to think it helps some people along the way."

Daina's next performance is Friday at 8 p.m. on her Facebook page.