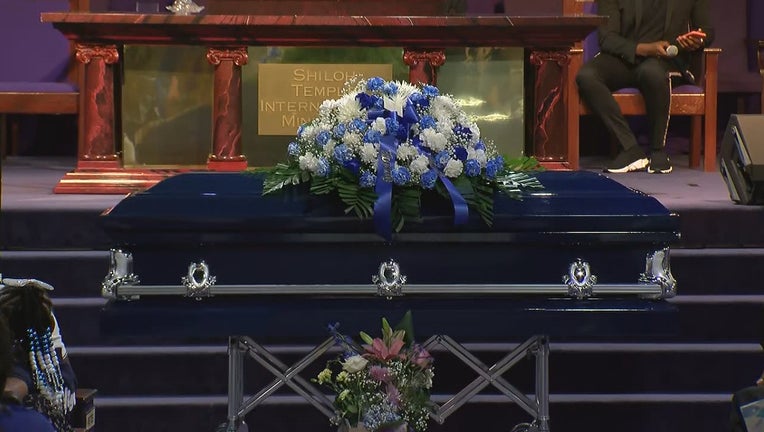 Winston Smith was laid to rest at Shiloh Temple in Minneapolis. (FOX 9)

MINNEAPOLIS (FOX 9) - On Saturday, a funeral service was held in Minneapolis for Winston Smith, a man recently shot and killed by law enforcement in a confrontation that sparked days of protesting in Minneapolis’ Uptown.

"When they do what they do to brothers like Winston, it takes all of us as a community to stand up and get justice for him one way or the other," a friend said while addressing those in attendance.

On Saturday, a funeral service was held in Minneapolis for Winston Smith, a man recently shot and killed by law enforcement in a confrontation that sparked days of protesting in Minneapolis’ Uptown.

Smith’s loved ones gathered at Shiloh Temple on Saturday morning to say their goodbyes.

"I’ve been crying a lot. I know he would be laughing at us, all the guys right now, telling us what are y’all crying for?" a friend said.

32-year-old Smith was shot and killed by a U.S. Marshals Task Force that was attempting to arrest him.

"I called his phone a thousand times, and I seen on social media that somebody died in Uptown," Winston’s roommate recalled.

Law enforcement was not wearing body cameras at the time, and say evidence suggests Smith fired a gun before his death. But Smith’s inner circle disputes this version of events.

"Winston, we want you to know we’re going to clear your name to the fullest extent, and we’re going to get justice for you, one way or another," a friend said.

On Thursday, lawyers for a woman who was Smith when he was killed, outlined a different version of events, "She never saw a gun on Winston Smith and she never saw a gun inside the vehicle at any time," Racey Rodne said.

"The things they talked about he would never even be capable of because that’s not in him," a friend said. "He’s not that kind of individual."

Now, those who knew Smith say they’ll forever remember him as an entertainer.

"His name’s going to live on forever," a friend said. "And he did big things in this world, he touched a lot of people."

Even as they cried, mourners remembered Smith as someone who could easily make those around him smile.

"He was truly a ray of sunshine, the kindest sweetest most joyful person, that’s what I want y’all to leave with and remember him," one person said.

"Thank y’all for coming, and Wince, I love you man," brother Kidale Smith said. "We’re going to get justice for you man."

The Smith family continues to ask anyone who might’ve seen something or recorded video of the shooting on June 3 in Uptown to come forward.