WASHINGTON - The whistleblower complaint that touched off a political tempest in Washington was released to the public Thursday, alleging President Trump used the "power of his office to solicit interference" from Ukraine in the 2020 election -- and that White House officials subsequently tried to "lock down" records of that phone call.

The rough transcript of the July call, between Trump and Ukrainian President Volodymyr Zelensky, was already released a day earlier by the White House. It confirmed that Trump sought an investigation from Ukraine into the Biden family, though did not show the president explicitly leveraging U.S. aid as had initially been suggested in some media reports.

But the whistleblower complaint, released by the Democrat-led House Intelligence Committee ahead of testimony from Acting Director of National Intelligence Joseph Maguire, goes further, though it is not a first-hand account of the call. The whistleblower, who remains anonymous, says in the complaint that White House officials who heard the call were "deeply disturbed" by it, and that White House lawyers discussed how to handle the call "because of the likelihood, in the officials' retelling, that they had witnessed the President abuse his office for personal gain."

Read the complaint on your mobile device

The document is sure to fuel the impeachment inquiry formally launched by House Democrats earlier this week. Trump, though, has maintained he did nothing wrong.

"THE GREATEST SCAM IN THE HISTORY OF AMERICAN POLITICS!" Trump tweeted Thursday.

White House Press Secretary Stephanie Grisham said in a statement that, "Nothing has changed with the release of this complaint." She described it as "nothing more than a collection of third-hand accounts of events and cobbled-together press clippings—all of which shows nothing improper," adding Trump "has nothing to hide."

The complaint cites “multiple White House officials with direct knowledge of the call" and accuses Trump of attempting “to pressure the Ukranian leader to take actions to help the President’s 2020 reelection bid.” Going beyond the details revealed in the transcript, the complaint then presents allegations that the White House tried to "restrict access" to records of the call.

"In the days following the phone call, I learned from multiple U.S. officials that senior White House officials had intervened to 'lock down' all records of the phone call, especially the official word-for-word transcript of the call that was produced--as is customary--by the White House Situation Room," the complaint says. 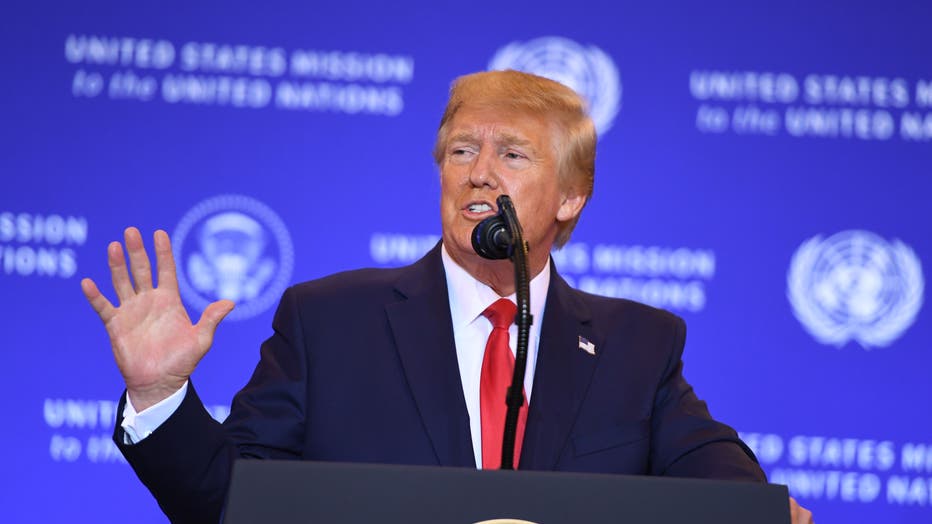 US President Donald Trump holds a press conference in New York, September 25, 2019, on the sidelines of the United Nations General Assembly. - Trump on Wednesday called the grounds for his impeachment laid out by Democrats "a joke," after he was accu

The complaint goes on to allege that White House officials said they were "directed" by White House attorneys to remove the transcript of the call from the computer system where they are normally kept. Instead, the transcript was allegedly kept on a different system normally used for classified information. The whistleblower says that, according to White House officials, it was "not the first time" a presidential transcript was placed into this system in order to protect politically sensitive information and not national security-sensitive information.

The White House released a record of the call Wednesday, confirming a request from Trump for Ukraine to assist Trump attorney Rudy Giuliani in investigating Joe Biden's efforts to have Ukraine's former top prosecutor fired. It also shows, as the complaint alleges, that Trump intended for Attorney General Bill Barr to be involved in this investigation as well.

Republicans maintain that the questions about Biden's intervention are legitimate.

Biden has acknowledged on camera that, when he was vice president, he successfully pressured Ukraine to fire that prosecutor, Viktor Shokin, who was investigating the natural gas firm Burisma Holdings — where Hunter Biden had a highly lucrative role on the board paying him tens of thousands of dollars per month, despite limited relevant expertise. Shokin himself had been widely accused of corruption, though. Still, critics charged that Hunter Biden might have been essentially selling access to his father, who had pushed Ukraine to increase its natural gas production.

The complaint cites articles from The Hill, in which Ukrainian Prosecutor General Yuriy Lutsenko alleged that Biden pushed for Shokin's termination to put an end to the Burisma investigation, that other Ukrainian officials had "interfered" in the 2016 presidential election by working with the Democratic National Committee, and that the U.S. Embassy in Kiev kept Ukrainian prosecutors from going to the U.S with evidence related to the election. The complaint notes that Lutsenko had expressed a desire to discuss these allegations with Barr.

Trump made the request on the July call for Ukraine to look into the Bidens after Zelensky first mentioned Ukraine's corruption issues, and after Trump separately requested as a "favor" that Ukraine help investigate foreign interference in the 2016 elections, including the hack of the Democratic National Committee (DNC) server involving the data security company CrowdStrike.

The complaint goes on to say that the day after the call, U.S. Special Representative for Ukraine Negotiations Kurt Volker went to Kiev and met with Zelensky and other Ukrainian figures. The whistleblower says that "[b]ased on multiple readouts of these meetings recounted to me by various U.S. officials," Volker and U.S. European Union Ambassador Gordon Sondland gave Zelensky advice "about how to 'navigate' the demands that the President had made of [Zelensky]."

The complaint drew criticism from Republicans after it was reported that that whistleblower did not have first-hand knowledge of the call. The Intelligence Community Inspector General’s office also found that the whistleblower showed “some indicia of an arguable political bias” favoring “a rival political candidate.” The IG’s office did, however, determine that the allegation in the complaint “appears credible.”

Another incident described in the complaint is an Aug. 2 meeting in Madrid between Giuliani and a Zelensky adviser, which U.S. officials said was a "direct follow-up" to Trump's phone call.

The Justice Department has since examined the call and determined that Trump's requests from Ukraine did not rise to the level of an in-kind contribution to his presidential campaign that warranted further investigation.

Fox News' Gregg Re contributed to this report.