The files indicate Hutchinson claimed that he wasn't driving his county-owned vehicle, attempted to grab for his gun holster while talking with a Douglas County sheriff's deputy, and delayed in providing a urine sample. The files also indicate that Hutchinson lied in previous TV interviews about his decision to get on the road.

Hutchinson got a break by quickly pleading to fourth-degree driving while intoxicated 12 days after his crash. Douglas County Attorney Chad Larson said Thursday that he did not know about Hutchinson's speed before the guilty plea because the event data recorder information had not been processed. Minnesota has an extreme speed law for people who drive more than 100 miles per hour -- which carries a six-month license revocation -- but Larson never charged that crime.

Hutchinson was silent on Thursday as Gov. Tim Walz and Lt. Gov. Peggy Flanagan joined the calls for his resignation. Walz said the sheriff had committed a "breach of trust."

Hutchinson reached 126 miles an hour in his 2021 Ford Explorer 3.6 seconds before the crash and was not wearing a seat belt, according to the vehicle's black box. Five miles outside Alexandria on Interstate 94, Hutchinson rolled the Explorer in the freeway median.

First responders found Hutchinson lying in the snow in the median. The sheriff required a deputy’s help to stand up, then stumbled and had to be helped into the backseat of a squad car, Douglas County video indicates.

Once in the squad car, Hutchinson repeatedly told deputies that someone else was driving the vehicle and that he had taken a taxi, the squad car video indicates.

"I wasn't driving," Hutchinson said through slurred speech. "Where are we right now?"

Based on Hutchinson's claims, Alexandria Police called a local taxi driver who told police a man had called him at 1:19 a.m. on Dec. 8 from Arrowwood Resort, where Hutchinson was staying at a Minnesota Sheriff's Association conference, to ask if any bars were still open. The taxi driver said no. Police later found the call came from Hutchinson's phone number. 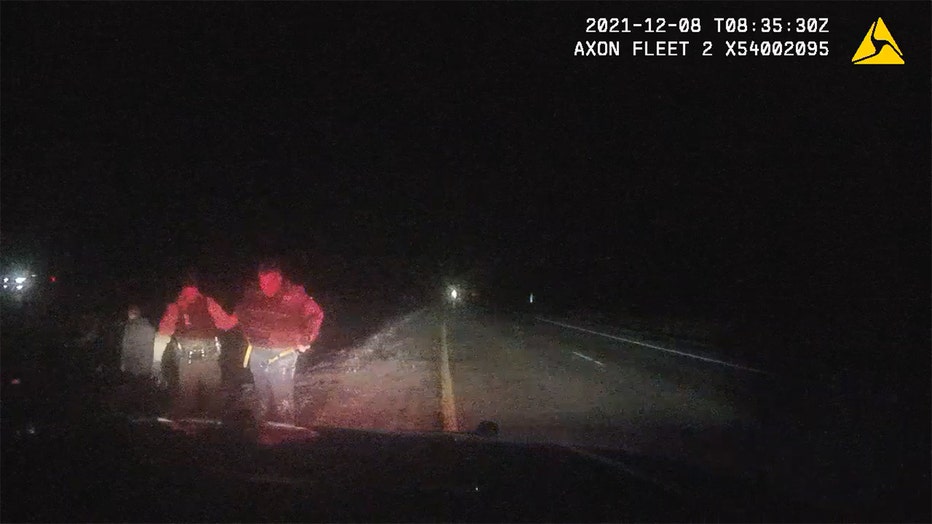 Hennepin County Sheriff Dave Hutchinson was helped to a Douglas County car after officers arrived on the scene of the crash.

In TV interviews on Dec. 26, Hutchinson claimed he got on the road back to Hennepin County because he couldn't sleep. He did not mention calling a taxi driver about bars being open. He has declined follow-up interview requests.

First responders found three firearms that Hutchinson had with him in the vehicle: a rifle, handgun and revolver. "The handgun was in a holster and Hutchinson was attempting to grab holster with his hand," Douglas County Sheriff's Deputy Dylan Kriese wrote in his report. Kriese said he took the gun away. The revolver was photographed lying in the snow outside the crashed Explorer.

An ambulance crew member found Hutchinson's keys lying in a traffic lane. "I believe Hutchinson threw the keys out of his pocket so the keys would not be in his possession," Kriese wrote.

The crash happened at 2:30 a.m. At 3:27 a.m., a Minnesota state trooper sought a search warrant for Hutchinson's urine sample. A judge signed off at 3:36 a.m. At Alomere Hospital in Alexandria, Hutchinson initially asked for his attorney to be present before providing a urine sample, then said he did not have to urinate, Trooper Brian Beuning said in his report.

The urine sample was finally collected around 5:15 a.m.

Hutchinson has refused to allow body camera videos of the incident to be made public. In Minnesota, a subject must consent before the videos are released.

Andy Skoogman, a spokesman for Hutchinson, said he was out of the office this week. Fred Bruno, Hutchinson's attorney, did not respond to a message.

Hutchinson, who is in his first term, has vowed not to resign and said he plans to run for reelection this fall. A majority of the Hennepin County Board has called for him to quit.