MINNEAPOLIS (FOX 9) - Hennepin County Sheriff David Hutchinson tried to put his drunk driving case behind him during a round of media interviews the day after Christmas.

But Hutchinson wasn't telling the complete story that day.

A search warrant unsealed Tuesday claims Hennepin County Sheriff David Hutchinson initially lied about being behind the wheel of the vehicle after a drunk driving crash in northern Minnesota last month.

During the interviews, Hutchinson took responsibility after pleading guilty to fourth-degree driving while intoxicated on Dec. 8 But he did not mention that he'd told first-responding deputies that a cab driver -- not him -- was behind the wheel of his Hennepin County-owned vehicle when it crashed.

The allegation was in a search warrant document filed by Minnesota State Patrol Sgt. Rod Eischens on Dec. 10, two days after the crash, and released publicly this week. A Douglas County deputy told troopers that Hutchinson said "on several occasions that he was not driving, and at one point, said that he had called a cab and that the cab driver was driving the vehicle." Troopers did not find anyone else near the vehicle.

Hutchinson did not make himself available for a follow-up interview Wednesday. Andy Skoogman, a spokesman for the sheriff, did not answer emailed questions. Fred Bruno, Hutchinson's attorney, did not return messages.

In the Dec. 26 interviews, Hutchinson said he remembered little about the incident because of head trauma he suffered during the crash.

It appears Hutchinson has not started repaying Hennepin County for the 2021 Ford Explorer, which the county purchased for $54,000 in December 2020.

"No updates for now," said Carolyn Marinan, a county spokeswoman, when asked if a repayment plan had been set up.

Skoogman did not answer when asked whether Hutchinson is driving a new county vehicle to replace the one he crashed.

Hutchinson rolled the Explorer around 2:30 a.m. on Interstate 94 near Alexandria, having just left the Arrowwood Resort where a Minnesota Sheriffs Association conference had wrapped up. Hutchinson said in his Dec. 26 interviews that he left his hotel room and got on the road when he couldn't sleep.

After the Explorer crashed in Douglas County, troopers had it towed to their Detroit Lakes headquarters, where they searched it. Then, a private tow company, Miller Towing, brought it to the Hennepin County Public Works facility in Medina.

There, the story took another twist. Independent journalist Rebecca Brannon took photos of the wrecked Explorer while it was on the lot, which did not have "no trespassing" signs posted. Brannon posted the photos on her Twitter account.

County Administrator David Hough was among the county officials who requested Medina Police investigate how the photos were obtained. The investigation has since closed, with no charges being filed.

Wednesday, FOX 9 noticed that the county has posted a "no trespassing" sign on the gate outside the facility.

Wednesday, another candidate filed to run against Hutchinson in this year's election. 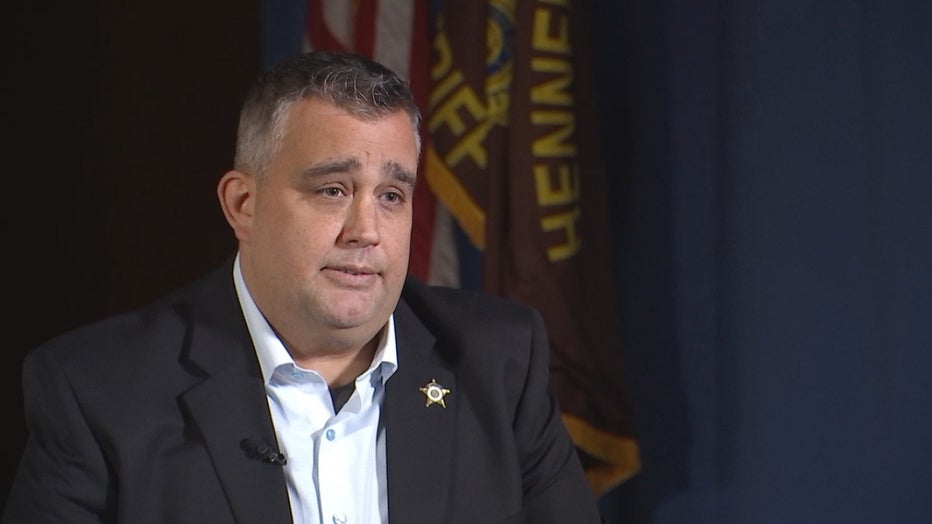 Hutchinson has vowed to run for re-election to a second term this fall.

In statements on Wednesday, two Hennepin County Commissioners called for Sheriff Hutchinson to resign his post.

The statements from Irene Fernando and Jeffrey Lunde reference the crash and the sheriff's response to the incident.

"You have stated that you will continue in your job because of an oath you made to Hennepin County residents," wrote Fernando in a letter to the sheriff. "I also took an oath on the same day as you, which mandates a moral and leadership obligation to vocalize my position."

Lunde agreed with Fernando, adding: "With the current tense climate around public safety, an incident like this involving the head public safety official of Hennepin County needs to be addressed…. Trust needs to be earned, and I know that accountability is central to building and maintain trust."