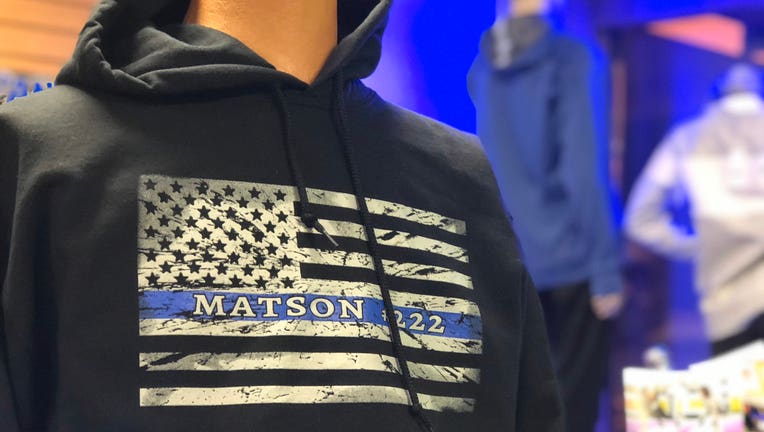 A Waseca sports apparel store has raised more than $15,000 for an officer shot in the line of duty. (FOX 9)

WASECA, Minn. (FOX 9) - Four Season Sports in Downtown Waseca started selling t-shirts to raise money after Waseca Police Officer Arik Matson was shot in the head while on duty. So far, they’ve sold nearly 1,600 of them.

“We want him to know that even though this tragic thing happened, we wrap our arms around everybody,” store owner Jeremiah Miller said.

On the day his shooter appeared in court for the first time, Officer Matson was able to wish his wife a happy anniversary.

Miller says the quote on the back of the shirt was selected by Officer Matson’s wife. The quote is from the Bible, proverb 28:1 “The wicket flee when no one pursues, but the righteous are bold as a lion.”

“It’s been amazing. And then people have asked us ‘hey what can we help you with to do this,’ so even the outpouring of support even just to help us get through the ordering is just amazing too.” Miller said.

He says coming together to help one another is just something people in Waseca do.

“I just think like when something like this happens it was a no-brainer for this town, in general, to say ‘what do we do? We’ll do anything possible whether it’s money or help or support or prayers anything.’ It’s an amazing town that we live in,” Miller said.

Miller says he plans to give the Matson’s the money from the first round of 1,600 or so shirts and will continue giving the family donations as long as people keep buying them.

For more information on how you can get a shirt check out their website.