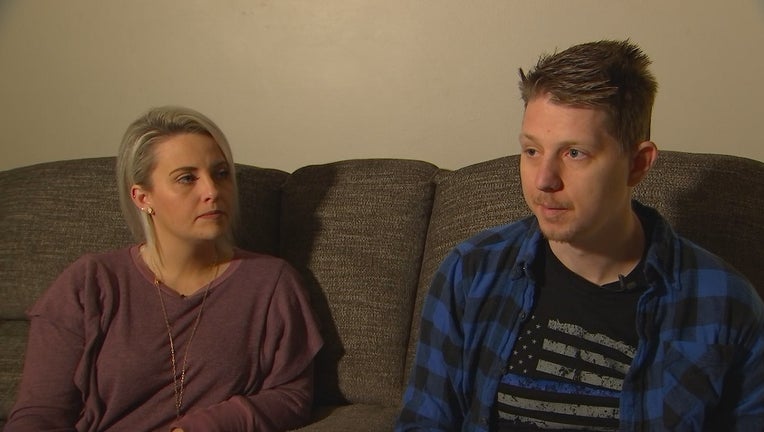 Arik Matson with his wife Megan spoke with FOX 9 as his second "alive day" approaches. (FOX 9)

WASECA, Minn. (FOX 9) - Two years ago this week, Waseca Police Officer Arik Matson was nearly killed in the line of duty while responding to calls about a suspicious person in the southern Minnesota town.

The shooter, Tyler Janovsky, was later sentenced to 35 years in prison for shooting Matson in the head. January 6 is Matson’s ‘alive day’ – the day his life was nearly stolen from him, and the beginning of his fight to regain it after seven years on the beat.

"The next thing I remember is just waking up at the hospital and being told ‘you were shot at work last night,’" Matson recalled of the event to FOX 9’s Babs Santos.

The bullet took out part of Matson’s brain and skull, which doctors have now replaced with mesh and 99 screws.

"It was like being an infant again," Matson said of the recovery process. "I had to learn how to do everything again. As far as swallowing and walking, I couldn’t walk at all."

The father of two girls spent a month at North Memorial Hospital, another at Bethesda and another at United, before seven months separated from his family for physical therapy in Nebraska.

"He missed out on holidays, birthdays," his wife Megan explained. "But when he came back to town, the community was waiting."

Now out of a wheelchair and on his feet again, his days are focused on strengthening his cognition; he’ll return to Nebraska for another ‘boot camp’ this spring to fine-tune his skills.

"To gain back some of the independence that’s been taken from me," Matson said.

He was once his family’s caretaker, making sure everything was OK, but now roles around the house have had to reverse.

While so much about life has changed, it’s made them all more thankful for life.

"Obviously it’s different than what I envisioned, but it’s better than the alternative," said Matson.

In this new reality, Matson’s faith, family, and community are getting him through it.

"It’s a new normal, but we’re getting used to it every day," he said.

Last summer, the "Arik Matson Bill" passed at the Minnesota State Capitol – legislation in his honor that toughens the penalties for people who assault police officers.