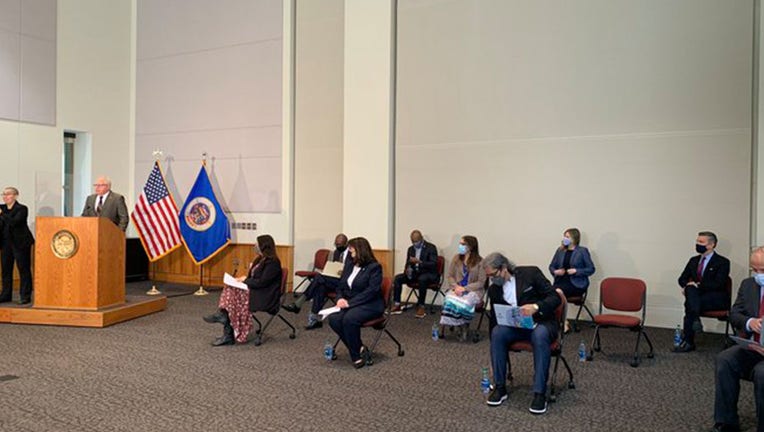 Gov. Tim Walz and several lawmakers held a news conference Thursday to press for police accountability measures before the May 17 end of session. (FOX 9)

Walz spoke at a 90-minute news conference--one of the longest in recent memory--along with several lawmakers. All were Democrats except state Rep. Tim Miller, R-Prinsburg, who is part of the five-member New House Republican caucus that broke off in 2019 from the House GOP.

Gov. Tim Walz and Minnesota Democratic lawmakers said Thursday that tighter restrictions on police must be a top priority as Senate Republicans prepare to open negotiations over the public safety budget.

Walz and nearly a dozen state lawmakers spoke at a 90-minute news conference -- one of the longest in recent memory -- to press their point. All the lawmakers were Democrats except state Rep. Tim Miller, R-Prinsburg.

With the country watching Minnesota's next move, the House is scheduled to debate police accountability changes in the dark of night Wednesday.

Democrats are advocating for more police accountability after Derek Chauvin's recent murder conviction and the April police killing of Daunte Wright in Brooklyn Center. They have proposed a series of changes that would eliminate protections for police officers against lawsuits, restrict no-knock warrants, ban traffic stops for equipment violations and end arrests for misdemeanor warrants.

"Now is the time for the Minnesota Legislature to act on police reform and accountability. Not later -- but now," House Public Safety committee chairman Carlos Mariani, DFL-St. Paul, said.

Chauvin's murder conviction looms over the debate. For Democrats, the verdict marked only a first step. But for Senate Republicans, it was justice served. Last week, the GOP backed out of plans to hold a standalone hearing on police accountability and said the public safety conference committee would deal with the issue instead.

Senate Majority Leader Paul Gazelka said Thursday that making police changes is less urgent than passing the $52 billion state budget. When asked, Gazelka declined to name any House measures that the Senate GOP supports, though he said Republicans might ultimately accept some.

Republicans will not agree to end qualified immunity, the legal protection that prevents police officers from being sued, Gazelka said. GOP members will also not vote to restrict police tactics for crowd control, he said.

"Too many people, I feel like, have thrown the police under the bus," Gazelka, R-East Gull Lake, told reporters at the Capitol. "They are very demoralized by the lack of appreciation for the work that they do. They must be at the table as we’re having these conversations."

Senate Republicans said the first public safety conference committee will meet at 9 a.m. Monday for an overview of the House and Senate bills. No public testimony will be taken, Senate Judiciary chairman Warren Limmer said in an email.

The DFL-controlled House and Republican-led Senate hand the conference committee gavel back and forth for each meeting, meaning Democrats are in charge one day and Republicans the next.

Walz said he feared the Senate GOP was trying to run out the clock until the May 17 adjournment date. He vowed to use his political clout to seek changes, though he did not commit Thursday to vetoing a budget that did not include police changes.

"I don’t draw red lines before we even start because it makes it hard," Walz told reporters.

Miller was the lone Republican to vote for the Democrats' public safety bill on the House floor last week. Days later, Democratic leaders appointed him as the House's Republican representative in upcoming negotiating sessions with the Senate.

Miller said his role on the conference committee would be to "bring balance" and "unite" competing interests. He is part of the five-member New House Republican caucus that broke off in 2019 from the House GOP.

"The people of Minnesota have lost faith in us as leaders to do what’s right for everyone," Miller said.

Lawmakers are required to adjourn May 17 regardless of whether they've passed the $52 billion state budget. Walz can call them back for a special session, as he did two years ago, to finalize the budget. If bills don't pass by July 1, state government shuts down.