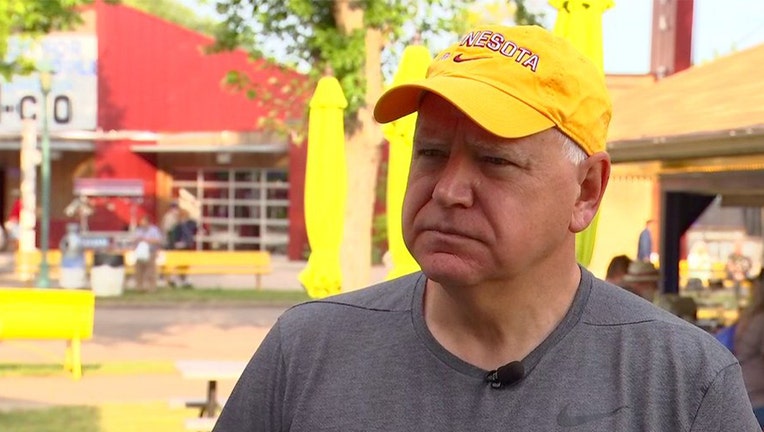 Gov. Tim Walz on the opening day of the Minnesota State Fair.  (FOX 9)

FALCON HEIGHTS, Minn. (FOX 9) - Gov. Tim Walz became the second prominent Democrat this week to come out against the Minneapolis ballot question that would replace the city's police department with a public safety agency.

In an interview with FOX 9 at the Minnesota State Fair, Walz said the ballot proposal had been "distilled down" and has left voters "confused" over its impact. Walz said police overhauls should be done by elected officials, not by referendum.

"It's been distilled down to this: defund police or fund police? I know it’s more complex than that, but I think that poses problems," Walz said. "So, I don’t think I would have this ballot question on there. I think there’s other ways to do it."

Earlier this week, U.S. Rep. Angie Craig said she "strongly opposed" the ballot question, which she said would "jeopardize public safety and diminish accountability." Craig represents a south Metro district that does not include Minneapolis.

A spokeswoman for Yes 4 Minneapolis, the group pushing the ballot initiative, did not immediately return a request for comment.

But other activist groups blistered Walz, saying the governor hasn't done enough to get significant police accountability measures through the divided state Legislature.

"The vast majority of people in Minneapolis still want the kind of meaningful change that only Yes 4 Minneapolis can now deliver in our city. We deeply regret that he (Walz) has not yet joined us in living up to his commitments to Minneapolis," said Kenza Hadj-Moussa, a spokeswoman for TakeAction Minnesota.

The Minneapolis City Council settled on final ballot language just before last Friday's deadline, overriding two Mayor Jacob Frey vetoes. Frey said the wording was not transparent, while activists said the question was clear enough for voters to understand what they were voting for.

The language will read, "Shall the Minneapolis City Charter be amended to strike and replace the Police Department with a Department of Public Safety which could include licensed peace officers {police officers) if necessary, with administrative authority to be consistent with other city departments to fulfill its responsibilities for public safety?"

A yes vote would remove the police chief -- who could ultimately be rehired as the top public safety official -- and eliminate the city's required minimum number of officers.

Last week, a Hennepin County judge struck down a lengthy explanatory note the city had planned to include on the ballot. The final language doesn't include an explanation.

Senator Amy Klobuchar has also come out against the ballot question, with a spokesperson saying, "Senator Klobuchar has long advocated for much-needed police reform legislation in the Senate. She has also repeatedly stated her opposition to defunding the police. She does not support this ballot measure."