Walz pushes for compromise during State of the State address

For the first time in three years, Governor Walz delivered his State of the State address to lawmakers inside the capitol. A main theme of the speech was finding compromise on a budget plan.

ST. PAUL, Minn. (FOX 9) -
Minnesota Gov. Tim Walz, delivering his first State of the State speech inside the Capitol since 2019, called on lawmakers to unite in the final four weeks of the legislative session.

In Walz's 55-minute speech, he urged the divided Legislature to move forward on his stalled agenda, while acknowledging that much of it is unlikely to pass. He recalled compromises from previous years -- many of which had to be brokered by Walz and legislative leaders at the last minute behind closed doors.

"I know there’s a temptation to get into our own corners or try to demonize," Walz said. "You move just a little further out of your bubble and Minnesotans say, 'Can’t you guys get along and figure out how to fix some of these things?'" 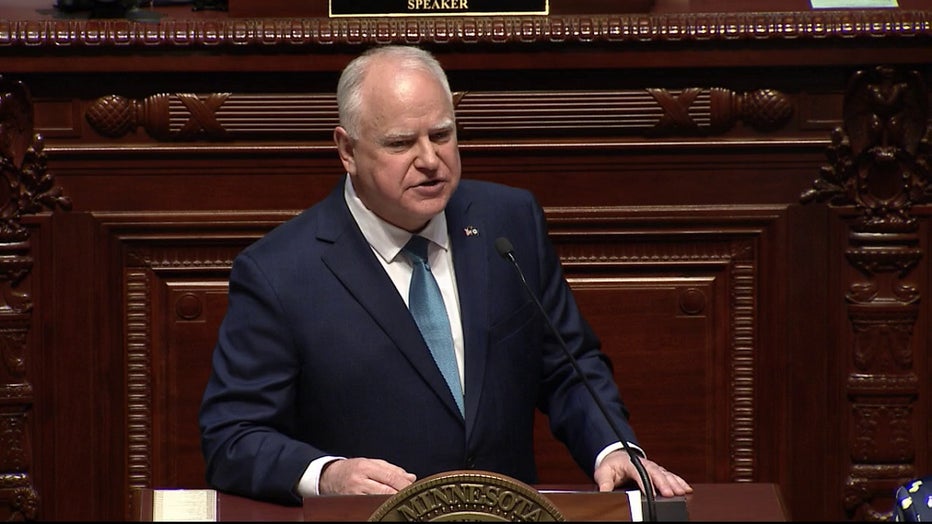 Governor Walz speaks to lawmakers during his State of the State on Sunday, April 24, 2022. (FOX 9)

Walz and all 201 legislative seats are up for election this fall. The state has a $9.3 billion projected budget surplus and $1.1 billion in federal assistance, but lawmakers disagree on how to use it.

Owing to the governor's decision to make the speech on a Sunday night, many lawmakers did not attend. Less than half of the Senate attended the speech in person, including just 10 of the 35-member Senate Republican majority. Senate Majority Leader Jeremy Miller was not in the Capitol.

Walz called on the Legislature to pass his signature proposal, $500 rebate checks for most adults. He said he'd also support income tax cuts, but not for wealthier people. Republicans have proposed a tax cut without an income cap.

"We can cut taxes for the middle class without cutting taxes for massive corporations and the wealthiest people of Minnesota," Walz said. They don’t need a tax cut."

Republicans said the governor's proposals do not go far enough. The state of the state is "overtaxed," they told reporters after the speech.

"When you have a $9.3 billion surplus, it’s pretty hard for anybody to look me in the eye and say we’re not overtaxing the population," said state Sen. Gary Dahms, R-Redwood Falls. "We’re overtaxing."

Republicans have called Walz's rebate checks a "gimmick," and top House Democrats have reacted coolly to the idea, too.

It was Walz's fourth time giving the address, but the first time since 2019 that he gave it in House chamber, the speech's traditional state Capitol venue.

In 2020, Walz gave the speech virtually because of the COVID-19 pandemic. In 2021, he delivered the address from the Mankato West High School classroom where he once taught.

Earlier this week, the governor blasted the Legislature for what he called an "absolutely ridiculous" delay on two key issues: refilling the state's unemployment insurance fund to prevent an April 30 tax increase on businesses and sending bonuses to workers on the frontlines of the pandemic.

Sunday night, Walz struck a more optimistic tone, suggesting that a deal was within reach.

"We have a couple things that fit together, a couple of things that serve Minnesotans. We have the resources to do it," Walz said. "If we’re getting close to a compromise on this, let’s finish this deal and finish this now."

Republicans are seeking $2.7 billion for the unemployment insurance tax break, while Democrats are pushing for $1 billion in bonuses. Asked if Walz had oversold the potential for a deal, House Speaker Melissa Hortman said she didn't think so.

"I remain hopeful that we get a solution before April 30," Hortman, DFL-Brooklyn Park, told reporters.

Republicans said the DFL should be blamed without an agreement.

"If that doesn’t happen, Democrats will be forcing a tax increase at a time when our state has a nearly $10 billion surplus," said House GOP Leader Kurt Daudt, R-Crown.