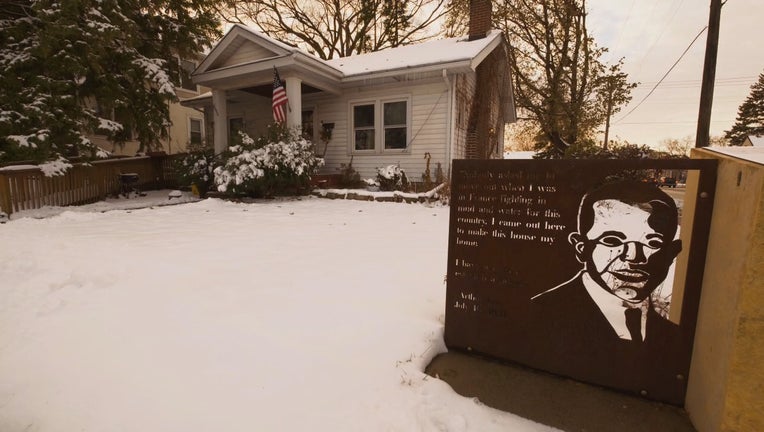 A plaque and sculpture now sit in the front yard of the Lee's former home to commemorate one of the worst racially motivated protests ever in the state. (FOX 9)

MINNEAPOLIS (FOX 9) - Minnesota has a reputation as a progressive northern state, but back in the ‘30s, racism and discrimination weren't just confined to the south.

FOX 9 took a look at what happened when a Black family crossed the imaginary color line to live in a white neighborhood in Minneapolis and how their former home has left a lasting legacy both good and bad.

The hidden history of discrimination behind a small house in Minneapolis

Minnesota has a reputation as a progressive northern state, but back in the ‘30s, racism and discrimination weren't just confined to the south.

At the corner of 46th and Columbus in south Minneapolis sits a small two-bedroom bungalow. The home's simple exterior is at odds with its complex history.

For years, Robert Forman never knew what happened to his grandparents at their home nearly 90 years ago. Even now, he has mixed emotions about one of the darkest chapters in the city's history finally coming to light.

"It was horrific, to be truthful about it. I never realized something like that happened," said Forman. "He just wanted a nice home for his family. This was it."

"I’m [happy] for the fact that they received some acknowledgement for what they did at the time, but sad because they aren't here to receive those accolades themselves," he added.

Arthur and Edith Lee bought the home in the then all-White Field neighborhood in 1931 and moved in with their daughter, Mary, when she was six years old. But, their new neighbors soon found out a Black family was living in their midst and took to the streets to show their displeasure.

"They had consulted with NAACP and they decided some teenagers might harass them, but otherwise they thought it would be OK," said Ann Juergens, of Mitchell Hamline School of Law, who studied the case. "They moved in, and within a week the white neighbors organized and started gathering outside the house they bought."

For days, crowds demonstrated in front of the Lee's house, hurling rocks, paint and racial slurs in hopes of getting them to leave. At its height, an angry mob of 4,000 people showed up, complete with vendors selling ice cream and popcorn like it was a county fair.

“Mary, who told me this story, didn't understand why her mother was so terrified until she got up one morning and learned that her dog had been poisoned," said Juergens.

"They would say things like, ‘burn them out, lynch them,’ and the police would come by and didn't try to control the crowds at all," Juergens added.

City leaders tried to negotiate a settlement where the Field Neighborhood Association would buy the house for $300 more than the Lees paid for it.

But, Lena Olive Smith, the first Black woman to pass the Bar Exam in Minnesota and head of the Minneapolis NAACP convinced the Lees to stand their ground and threatened to ask the governor to call in the National Guard.

"I think she saw the lay of the land for Black folks in the Twin Cities when they wanted to buy a home," said Juergens. "There was a lot of cheating, lying, redlining - though redlining hadn't developed quite thoroughly in 1931 - and she knew appeasement didn't work. She had seen it not work."

After the Lees made it clear they were staying put, the crowds started thinning out and eventually disappeared. The family moved to another neighborhood in south Minneapolis a couple of years later after feeling they had stayed long enough to make their point.

Even though the "racial riots" - as the newspapers called them - showed the worst of human behavior, Forman says they are also an example of the best. His grandfather was a World War I veteran and a postal worker, and at the height of the unrest, his white co-workers and vets from the American Legion came to his aid, standing guard with guns at the house all night to keep the Lee family safe.

"There’s good and bad people in every race, and they will show up," said Forman. "The good showed up. The bad were already here, but the good showed up to save the day. They literally saved the day."

A plaque and sculpture now sit in the front yard to commemorate one of the worst racially motivated protests ever in the state. The house is also on the National Register of Historic Places because as Forman says, if we don't know our past, we can't create a better future.