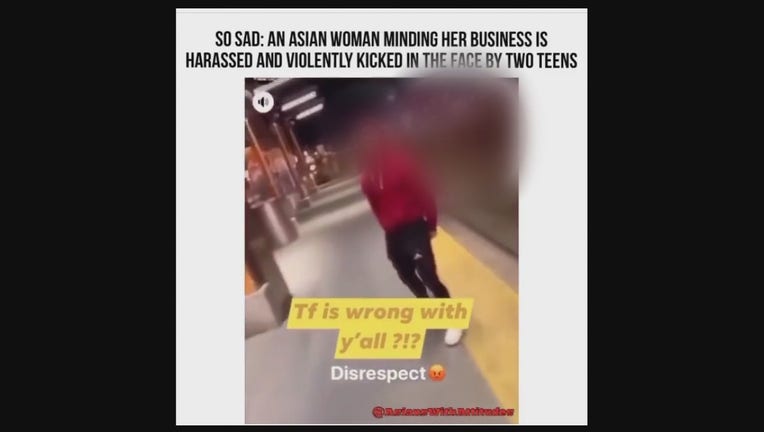 Video shows the moments leading up to an assault on an elderly woman on a St. Paul Metro Transit platform.

ST. PAUL, Minn. (FOX 9) - Three teenagers are in custody Wednesday night after a disturbing video showed someone kicking an elderly woman in the head.

An older Asian-American woman was standing alone at a light rail platform and was taunted by two teens. Then, she was kicked in the face by one of them before the teens turned and ran away.

“To say this is uncalled for is such a huge understatement,” said Metro Transit spokesperson Howie Padilla. “It really is.”

Metro Transit says it started getting calls about the assault Tuesday after the video was posted on social media.

A spokesperson said investigators were able to narrow down the location to the Green Line station at University and Dale in St. Paul.

Investigators then looked at their own security footage to determine the assault happened just after midnight Monday morning and were able to identify the teens in the video, which has led to three arrests.

The attack comes at a time when Asian-Americans in Minnesota and across the country have reported a rise in racially motivated attacks because of the COVID-19 pandemic, which is believed to have originated in China.

Police would not say whether investigators believe any racial motivation existed with the unprovoked assault, however.

Investigators say the trains were not running at the time of the attack, so they want to know why the woman and the teens were on the platform, but they say technology, police work and social media combined in this case to help turn an outrage into arrests.

“This won’t be finished until we can hold these people accountable and that is what we are working hard to do,” Padilla said.